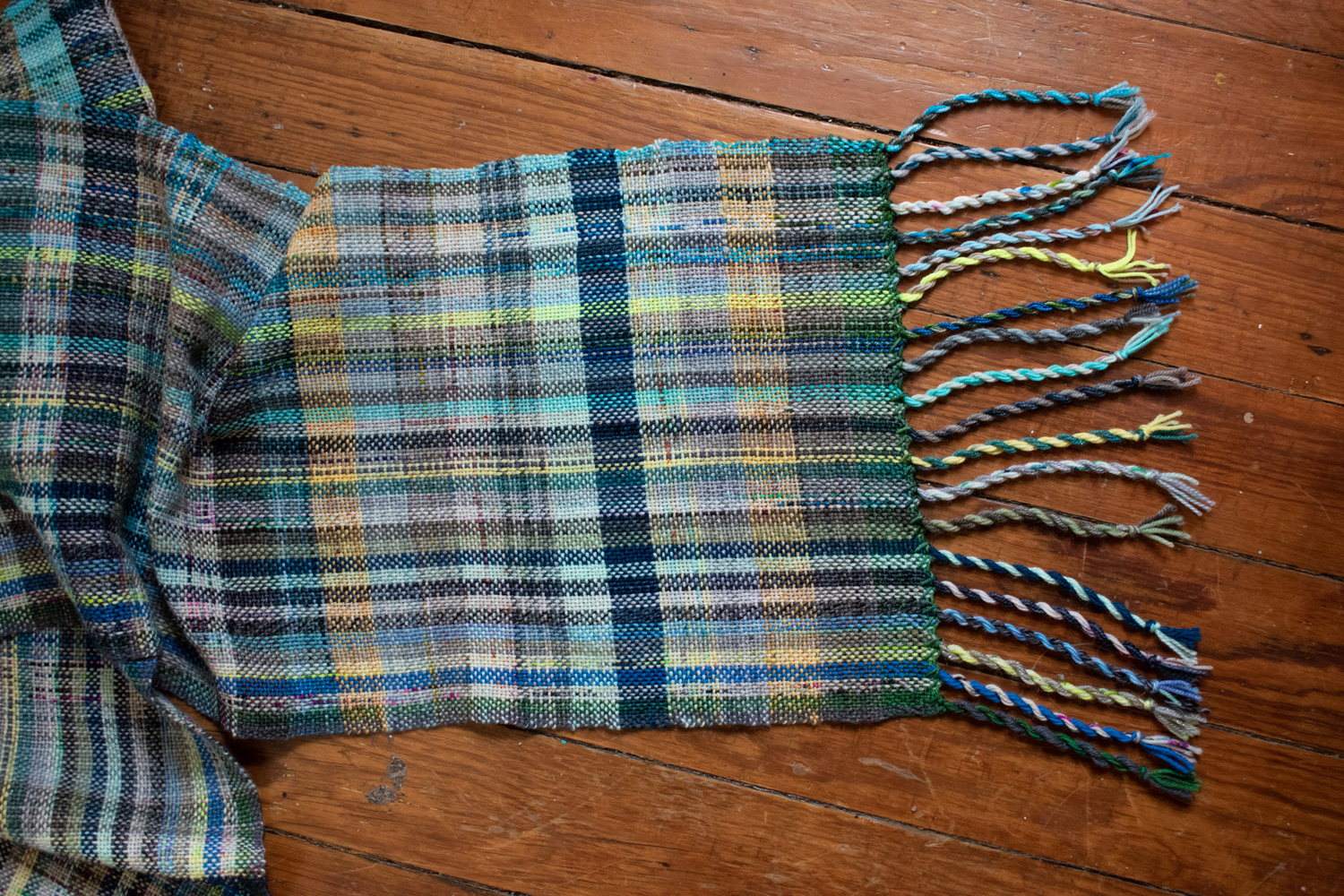 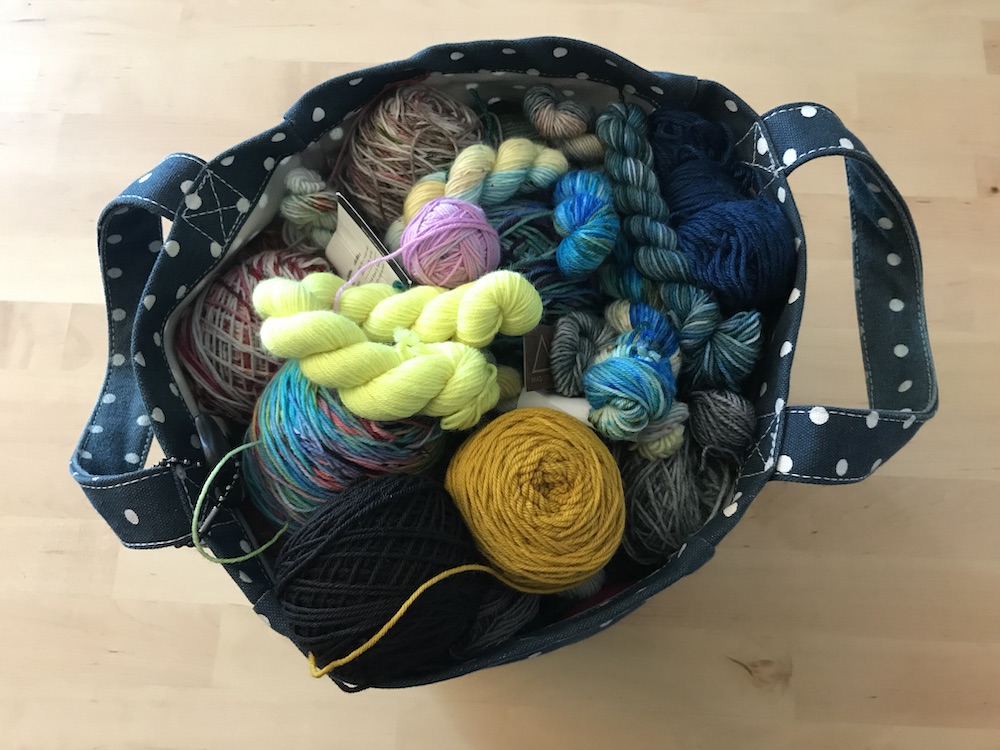 When working with my Schacht Cricket Loom in the past, I have found that weaving always eats up yarn way faster than my knitter brain expects it to. This made me think, why not try a woven scrappy project? I'll provide you with tips and ideas for making your own Sock Scrap Scarf! 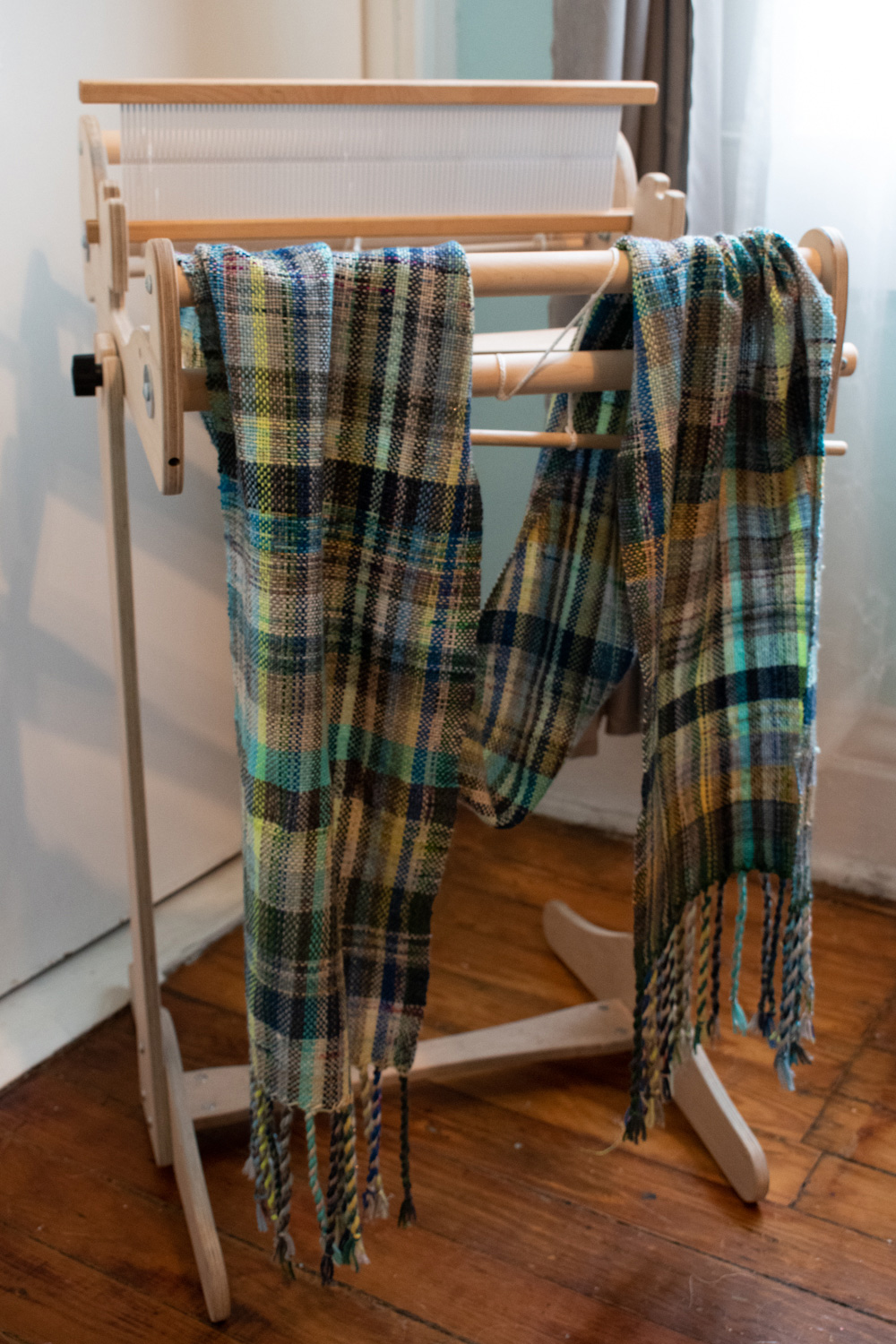 I wove this on a Rigid Heddle Loom but you can also use a Floor Loom or a Table Loom! Check out our blog post, How to Create Plain Weave on a Multi Harness Loom if you need help setting up your treadles!

My first step was to sort out the scraps I wanted to use in the project. I sorted them before starting so that my project would have a cohesive color scheme without me having to make many decisions while weaving. I suggest you lay out all the scraps/minis you will be using on a nice clean flat surface so you have enough room to sort. Once they're all on the table, try to put similar colors near each other. I attempted to do this somewhat in order of the color wheel because sticking with warm/cool colors can be an easy way to create cohesion when you're working with a lot of different colors. 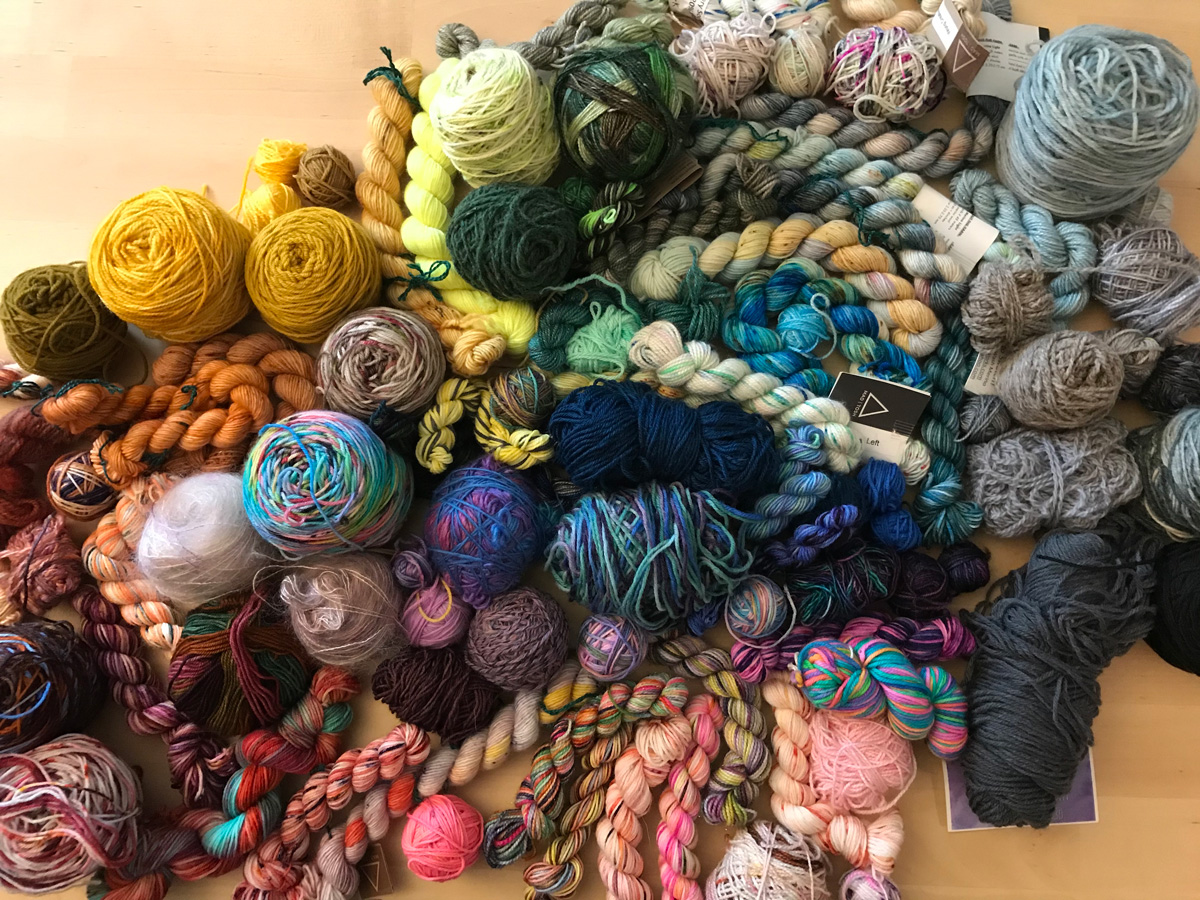 Now that everything is all organized it's easier to see how much of each color there is. I had just finished a very purple/pink centric scrappy shawl project so I decided purples and pinks were off the table for this scarf. I also really liked the little grey/blue/green zone in the top right corner, so I separated those out. 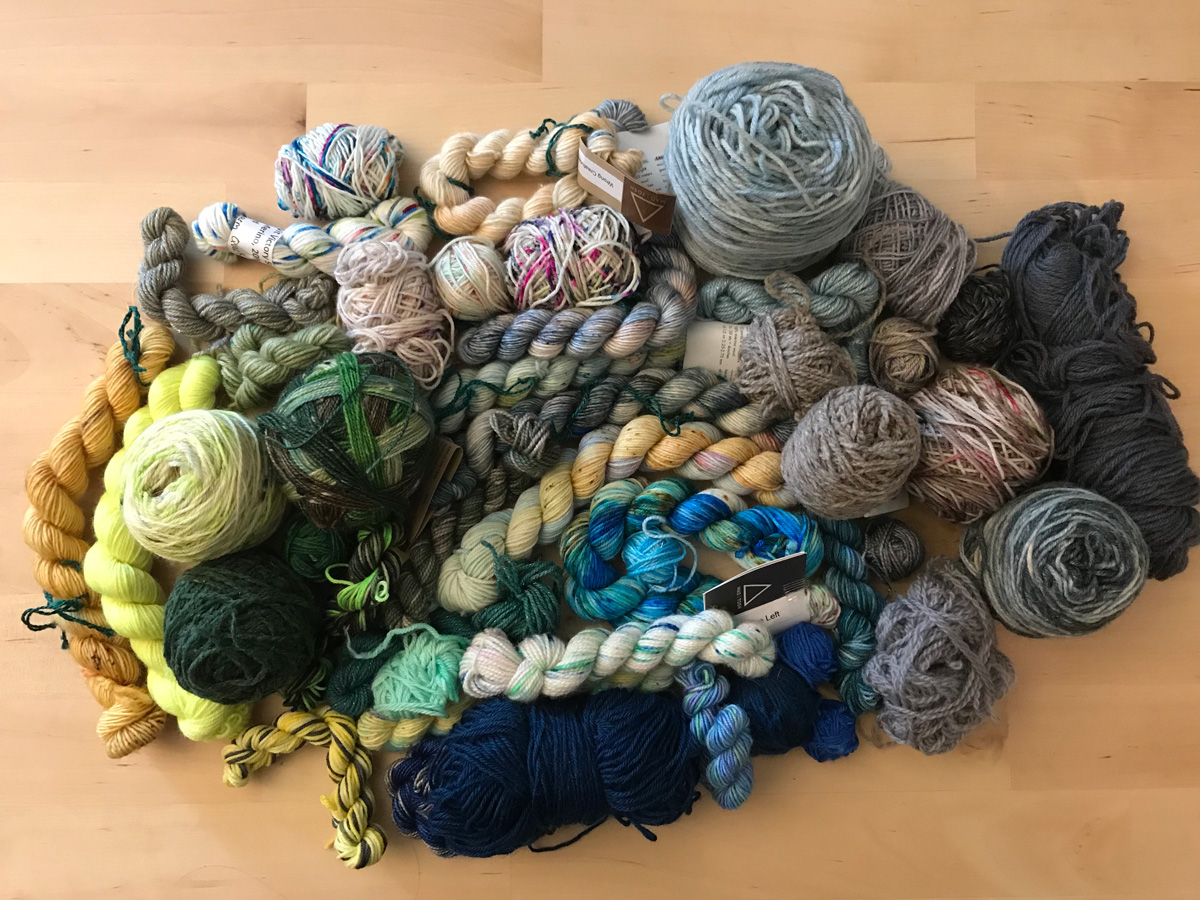 I thought that the blues, greys, and greens needed a little pop. Plus, I had a couple mini skeins that were blue/yellow so I added in some of the more yellowy scraps/minis. Voila, a color scheme is born! Keep in mind I didn't do any yardage math because this was meant to be a fun improvised project. I had no intentions of making a repeating stripe pattern or using the same amount of each color. I guesstimated that this would be more than enough yarn (it was) and figured if I ran out I would add in some of the other colors I excluded before. All in all this is well over 300 grams of yarn and was more than plenty to work with.

Some of the scrap yarn was single ply, or really lofty easily breakable woolen spun yarn. I put these to the side because I prefer to use plied more durable yarn in my warp for rigid heddle projects. The more fragile yarns are great for the weft. 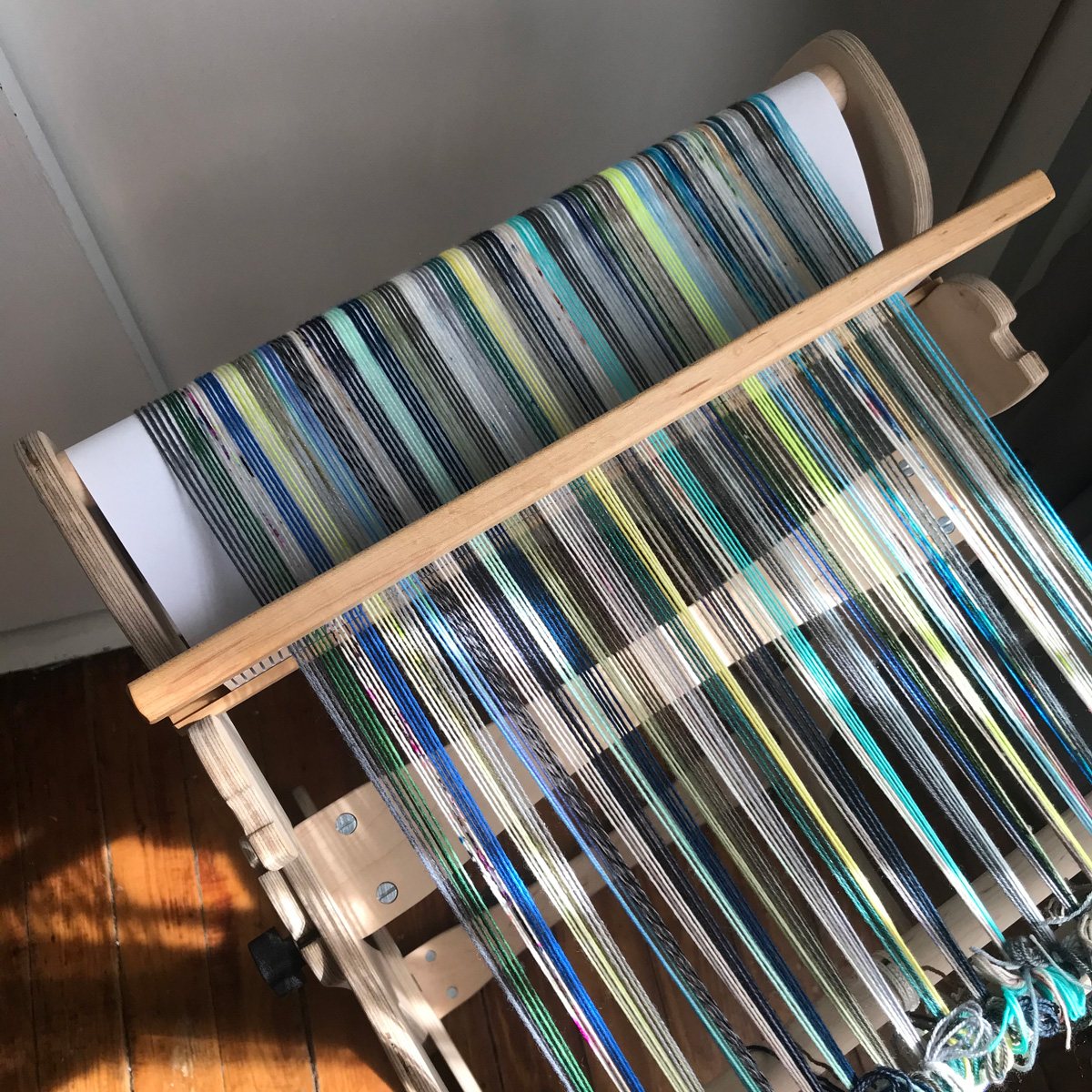 I used the direct warping method and had my peg about 90" away from my back apron rod. You could make your own Sock Scrap Scarf with whatever length warp you desire! My project has 152 warp ends and I'm using a 12 dent heddle. I wanted it to be fairly wide but not take up the entire weaving width of my 15" Cricket Loom. Also I knew I wanted the number of warp ends to be divisible by 8 so I could easily bundle ends into groups of 2 to make twisted fringe at the end. 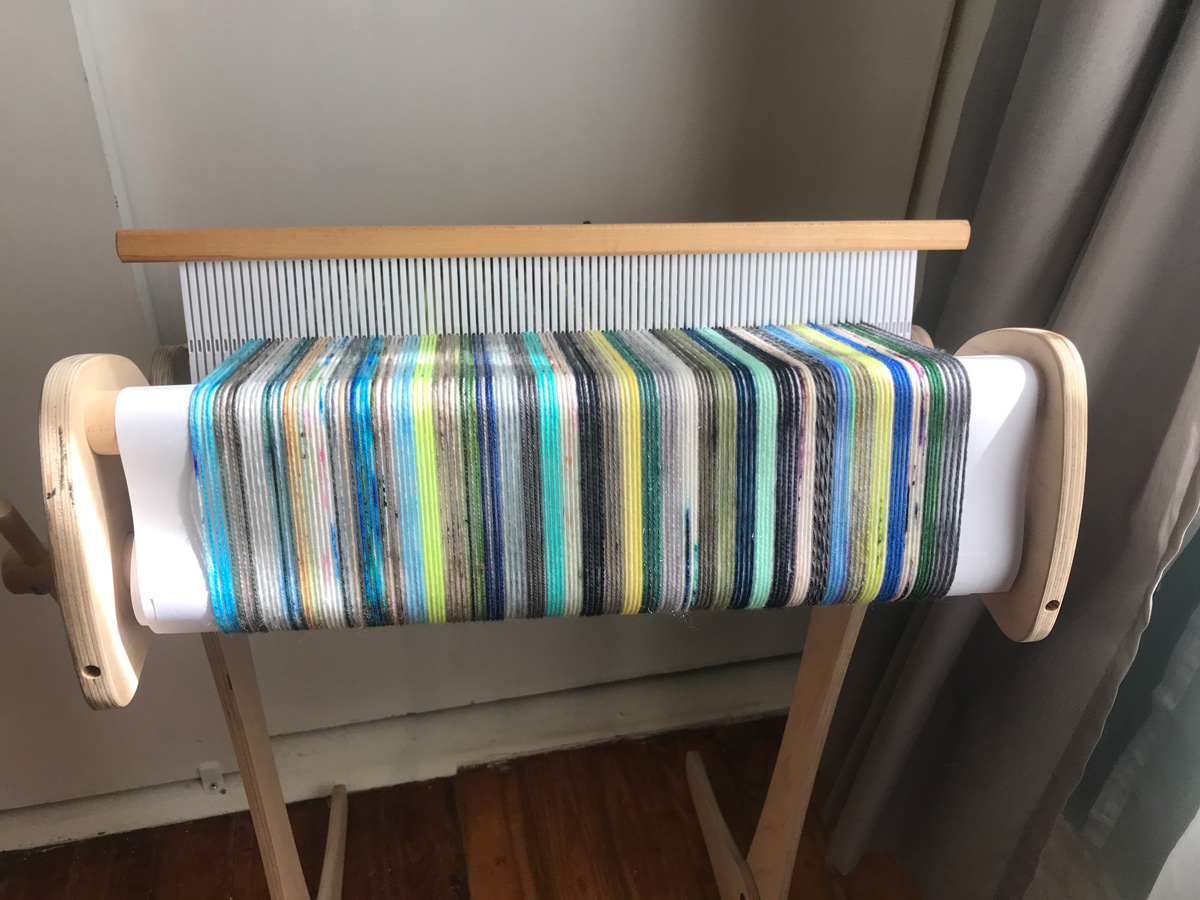 Each color only has 4 total warp ends, which means it went around the warping peg twice before it was tied off on the apron rod to start a new color. All of the yarns in the warp are different, but if I had less colors available to me I would have been fine with repeating colors. The only method to my madness when choosing warp colors was that I didn't want to have big chunks of similar colors next to each other. If I used a bright solid blue, I waited a few inches before using another bright solid blue. 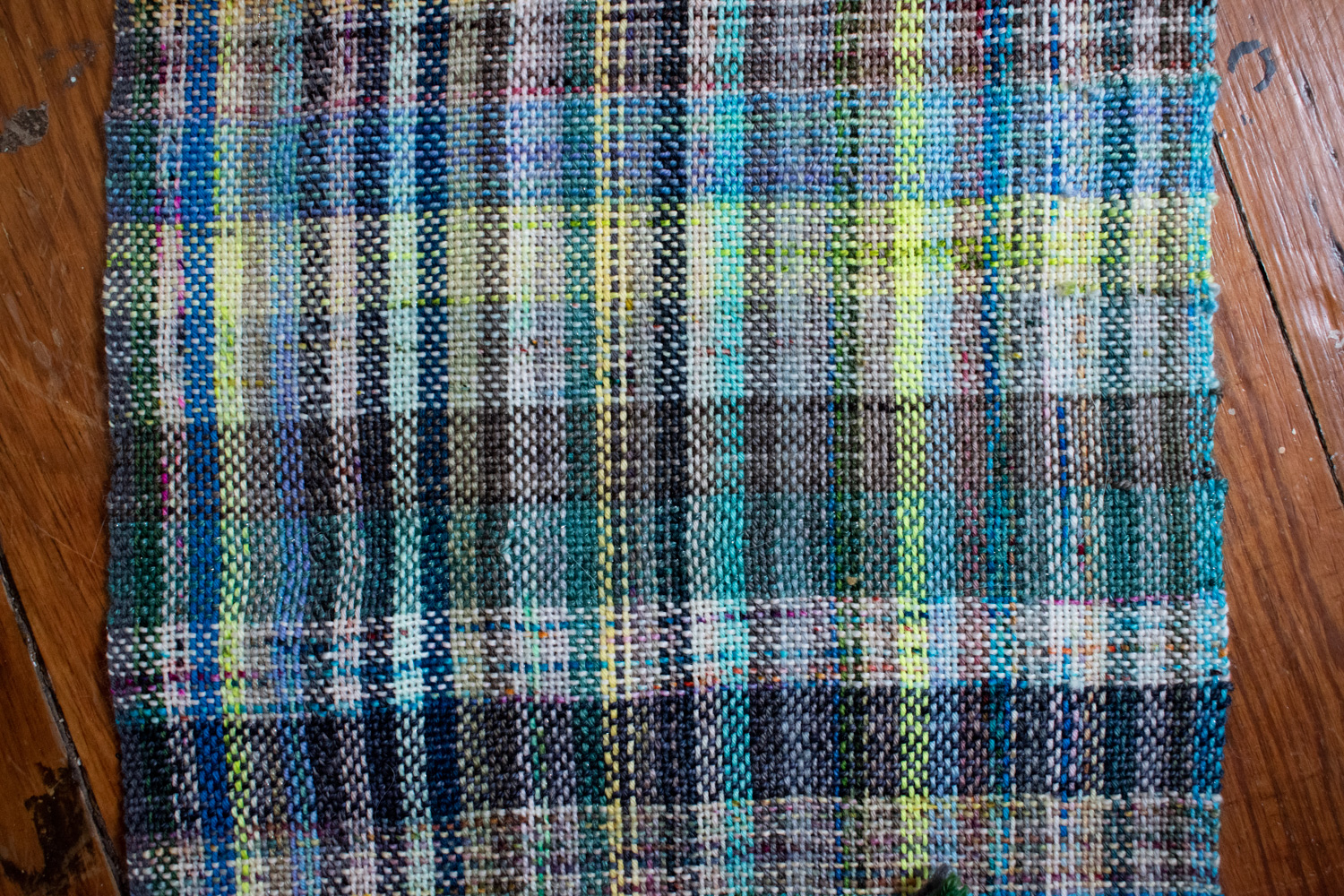 For the weft I had even more colors to work with because I was going to add in the more fragile yarns I had excluded from the warp. I did 12 picks of each color before switching to the next color. I thought about doing 4 picks of the weft to make the scarf have a pixelated effect to match the warp, but honestly, was too lazy to change colors that frequently. I think the wider stripes look nice and modern as well. The same rule from the warp of trying to purposely break up colors that were similar to each other was followed for the weft.

I completed a hemstitch to finish the ends of the scarf. While I was finishing the scarf I went ahead and recorded a YouTube video demonstrating how to work the Hemstitch. 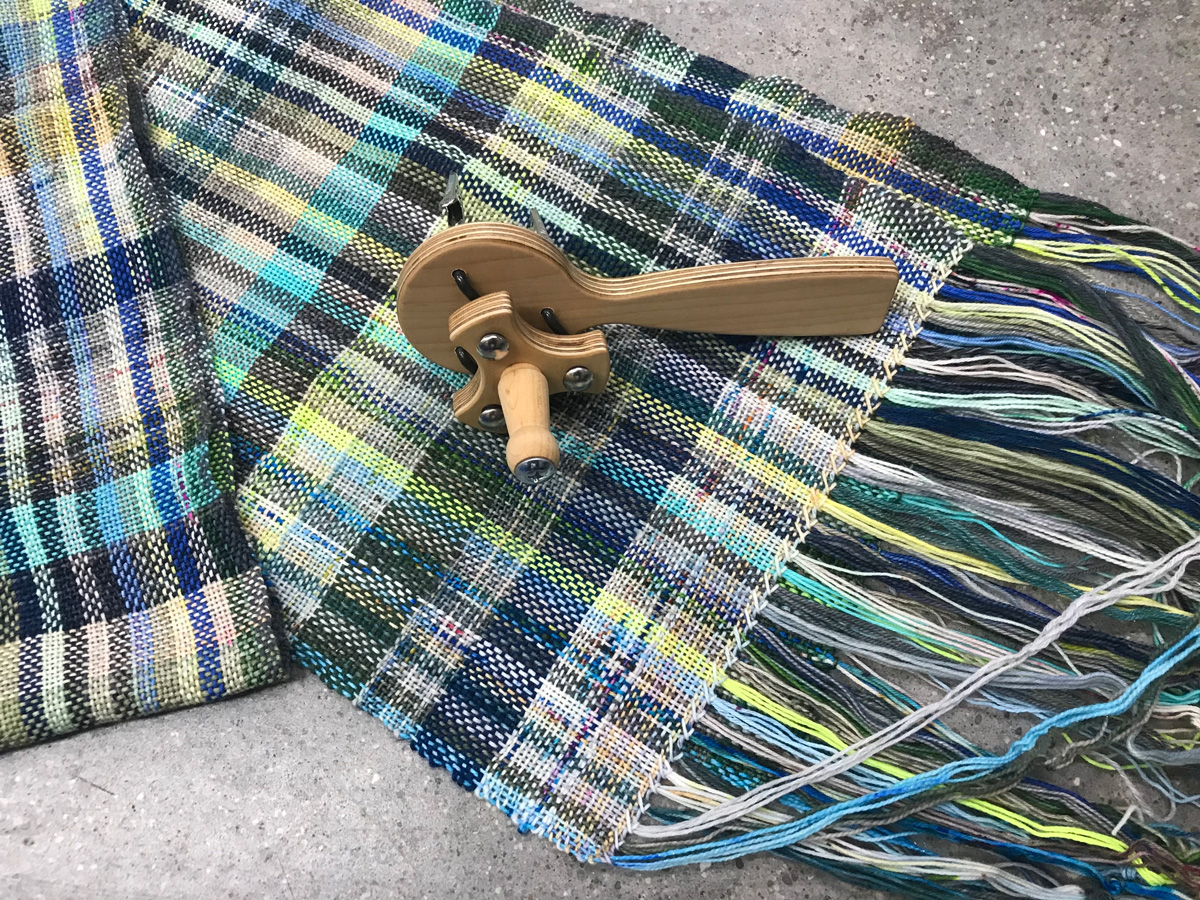 I trimmed the fringes so they were 9" each and then twisted 2 bundles of 4 ends together to create my twisted fringe. I enjoy the barber pole effect the more contrasting pairs of colors are having with each other. 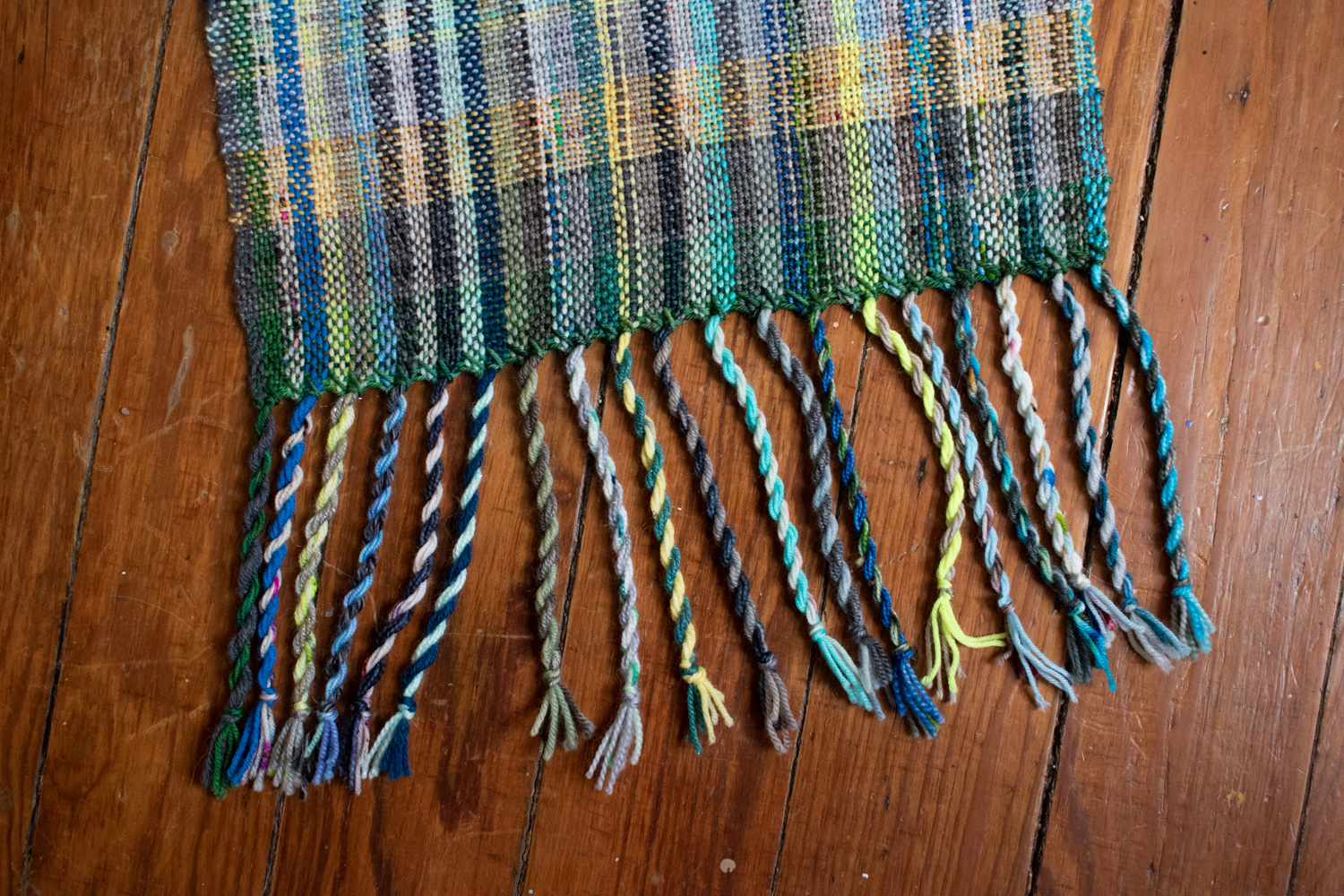 I had a lot of fun getting to use up a bunch of scraps in this scarf! I hope you are inspired to make your own scrappy projects. Share them with us on Facebook or Instagram, we'd love to see them! 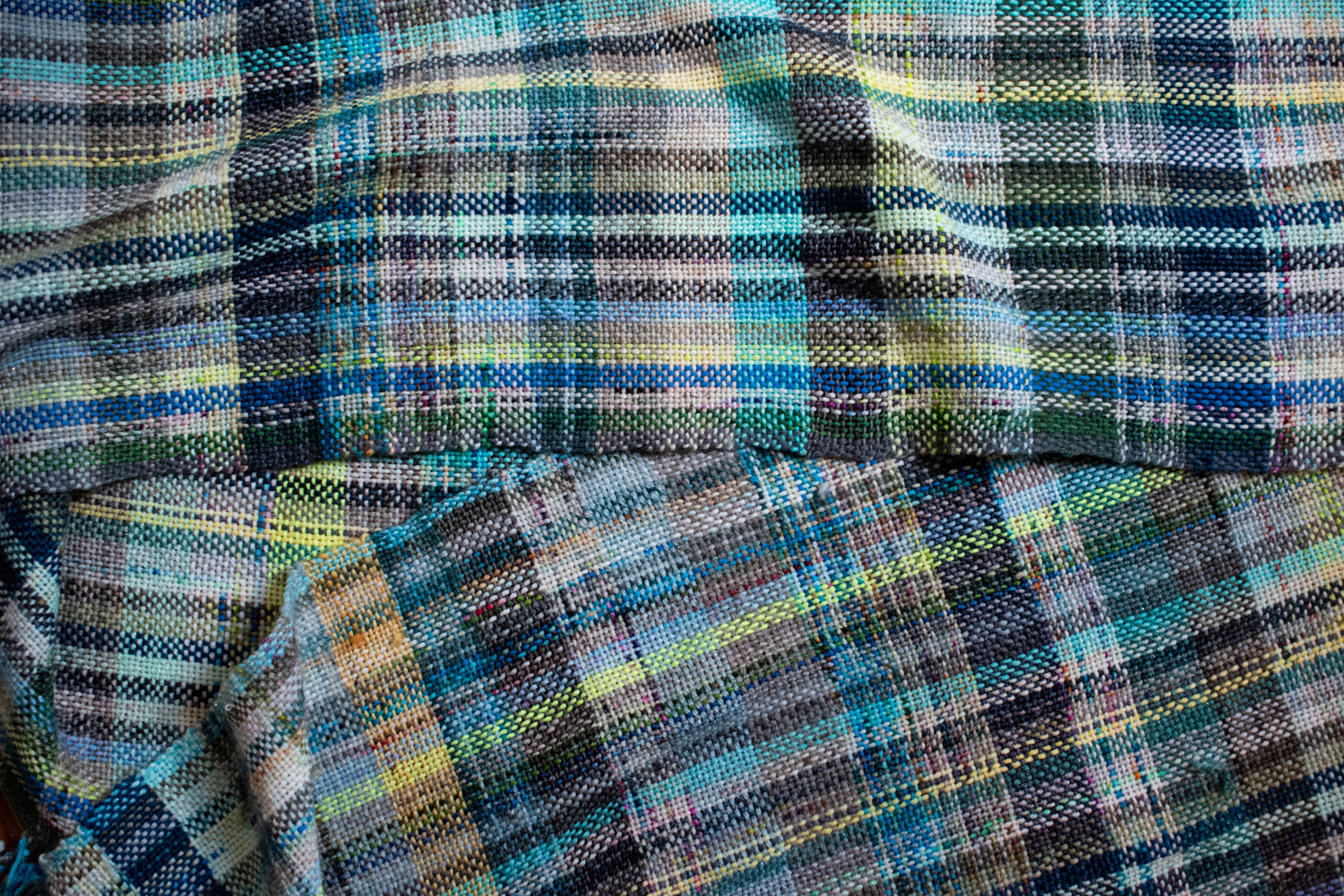