I was in Iceland back in 1986 for just a very few days, and I had always wanted to go back. Among other things, I wanted to see the Northern Lights; but basically, I just wanted MORE of Iceland. At nearly 67 years old, and the body not getting any less decrepit, now was the time. I had tried and failed to drum up any interest among my friends last year; this year the magic worked, and I asked my friend Leslie, “Hey, you wanna go to Iceland?” She said, “Sure!” and so we were off.

We planned (well, actually, she did; I was far too freaked-out by my upcoming cataract surgery to do anything; it turned out to be very successful and very much a non-event) for about a month, and flew out the second week of February. First of all, the weather was completely overcast and we saw very little of the sky, so no Northern Lights. Proving the old adage though that it’s the trip and not the destination that we travel for, we still had a ball. We met a lot of wonderful people, ate lots of great food, saw magnificent scenery, soaked in luxurious thermal spas, and bought yarn. Along the way we studied some history, studied textiles, learned some language, and became intrigued with a new cuisine. The photos that follow give a small part of our journey; I hope you’ll enjoy them. 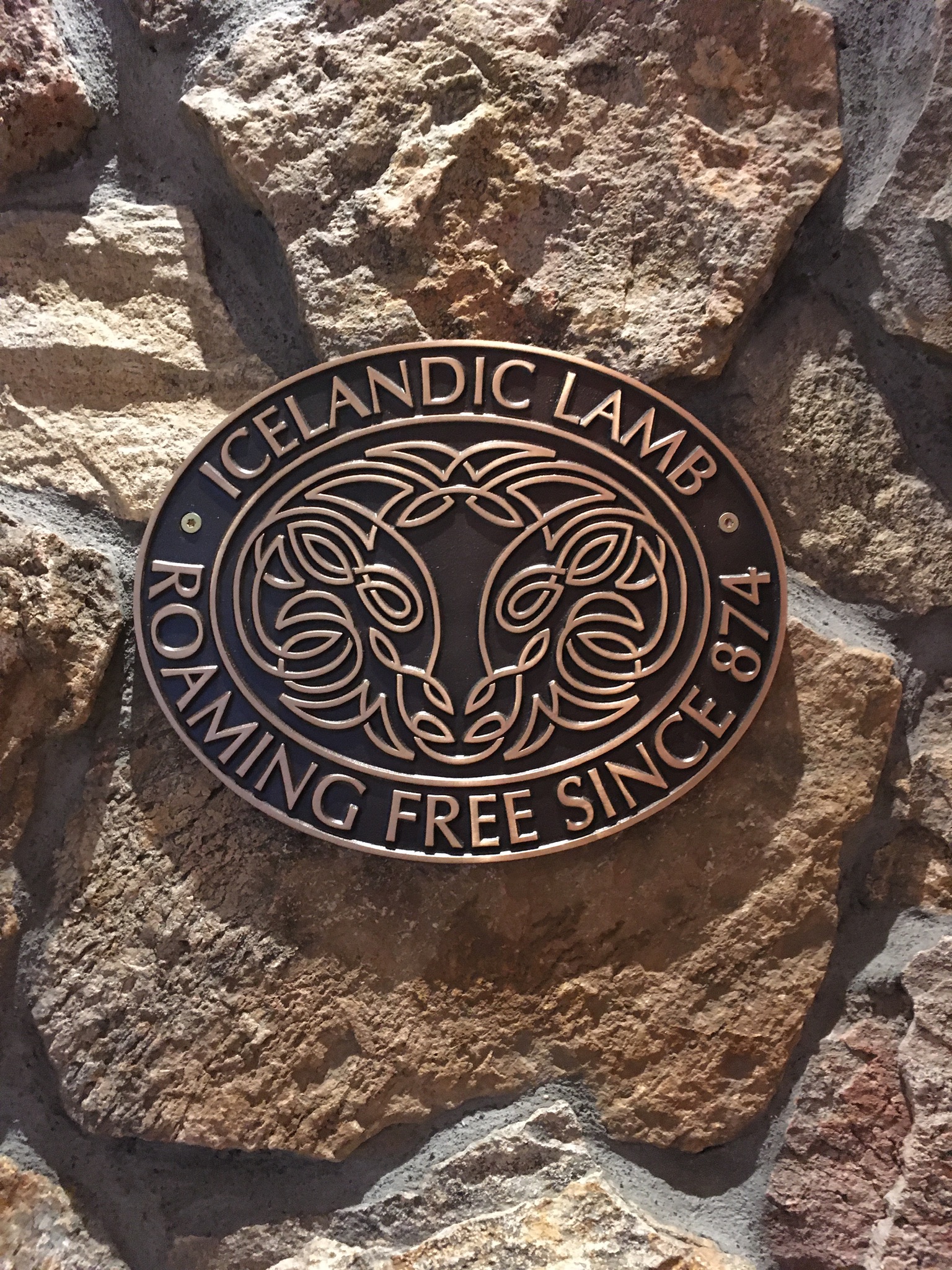 Our first dinner in a restaurant in Reykjavik, and the promise of some of the goodies that lay in store for us. I’ve raised sheep before, and range-fed is indeed the best; we were not disappointed! 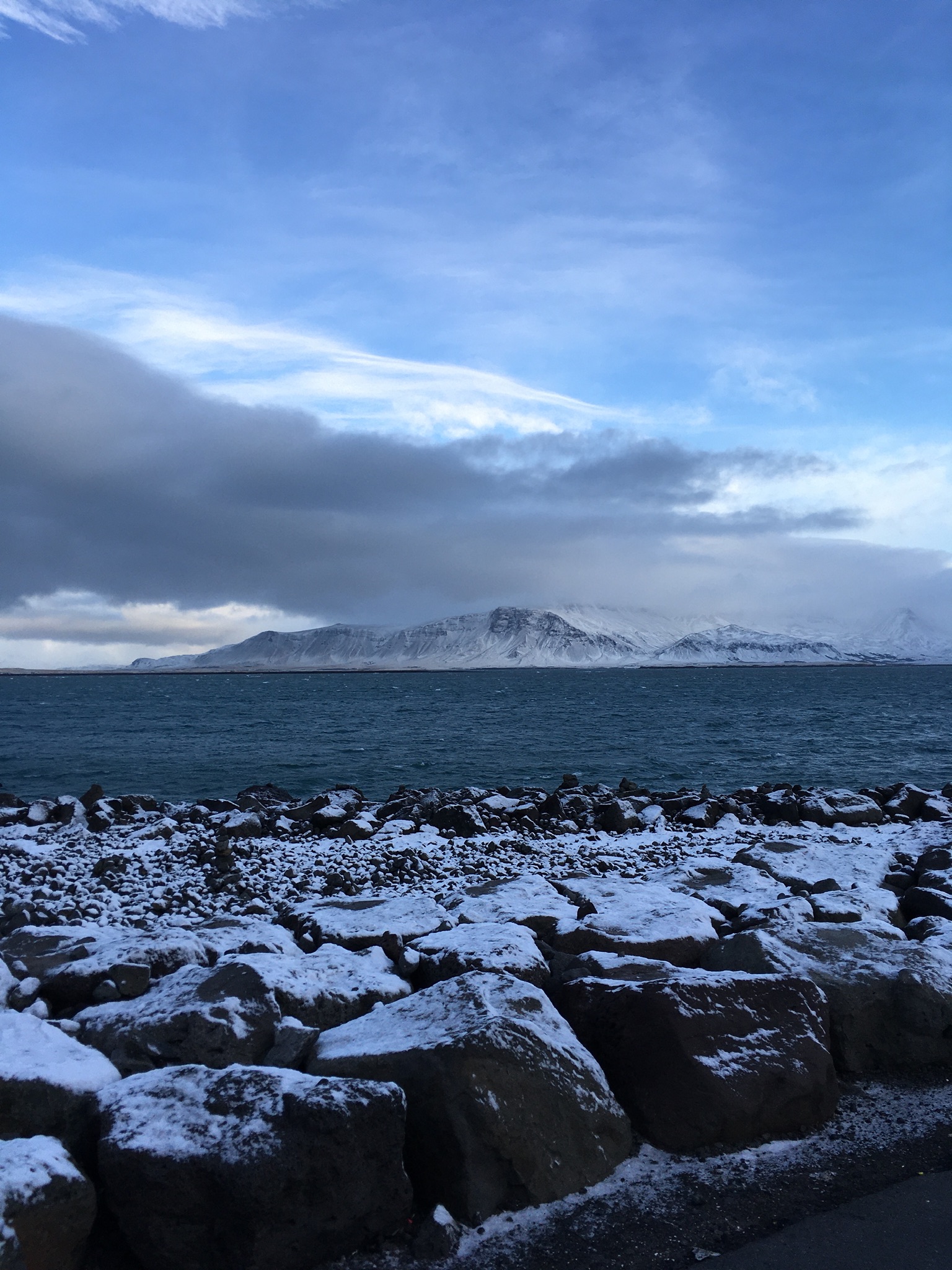 This is the edge of the harbor in Reykjavik where we got off the shuttle bus right next to Harpa, the big concert hall. Its rugged beauty is probably best appreciated in a photo; it was blowing a 20 mile an hour gale, and COLD. A quarter mile inland, and with the buildings of town to break the wind, it wasn’t unpleasant at all. 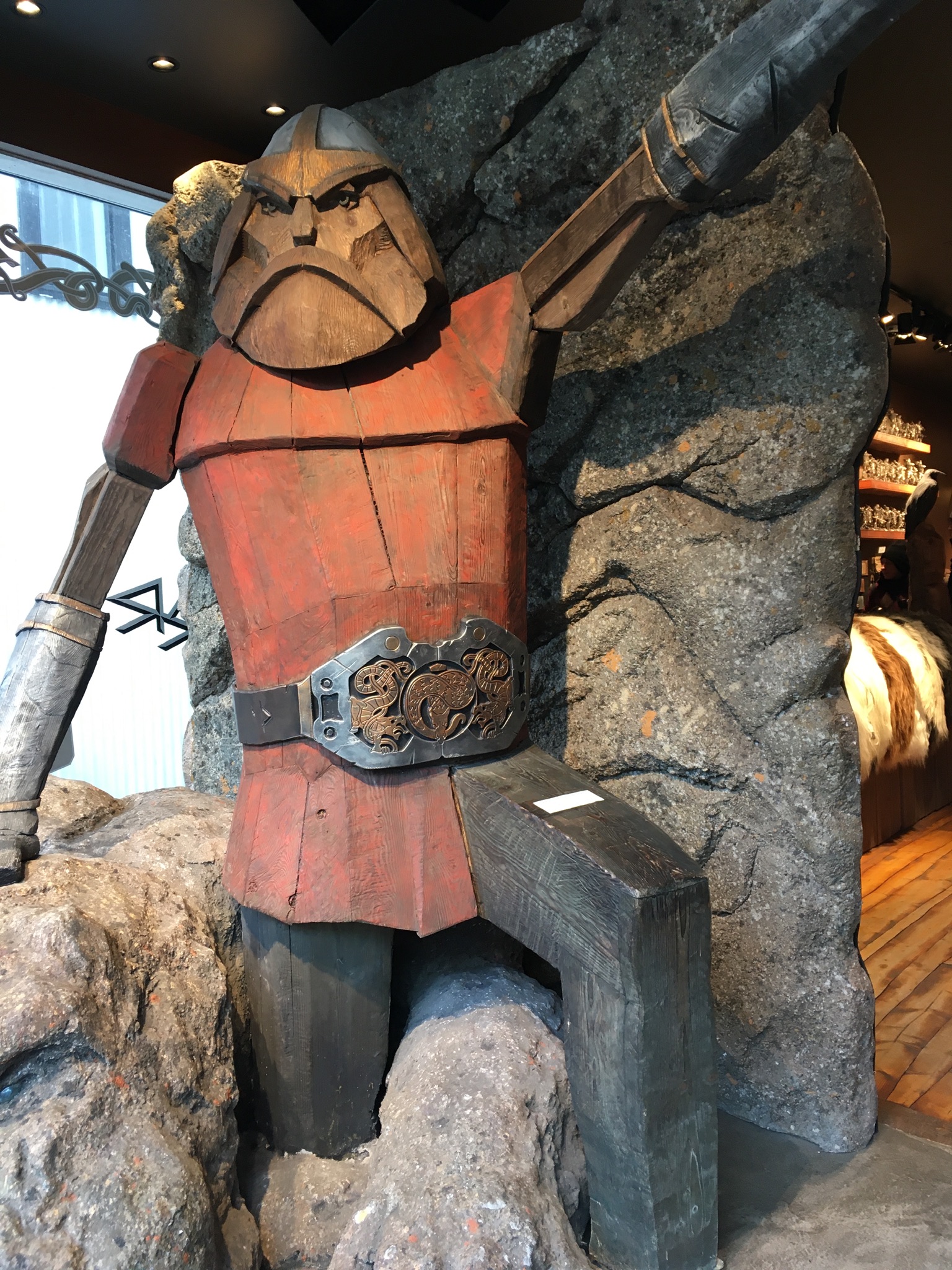 His name (and the name of the shop) is Thor; sometimes you just need to do the tourist thing and go shopping. A new pair of shearling gloves, and I was better equipped than with my old ones. 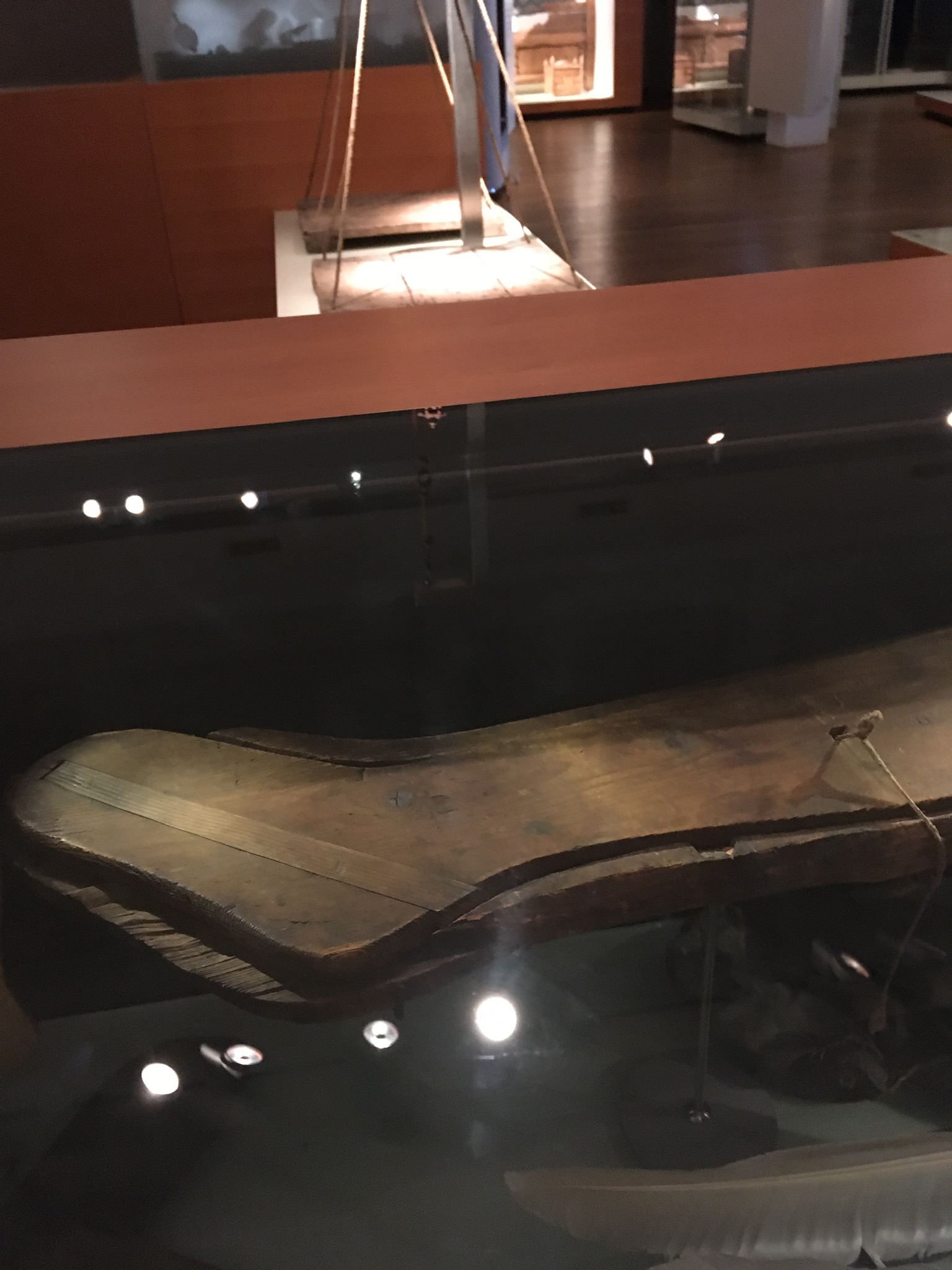 This is the National Museum in Reykjavik; there were a lot of textile exhibits there, not surprisingly. They are a people who believe in wool and lots of it, with good reason. This is an old stocking blocker. 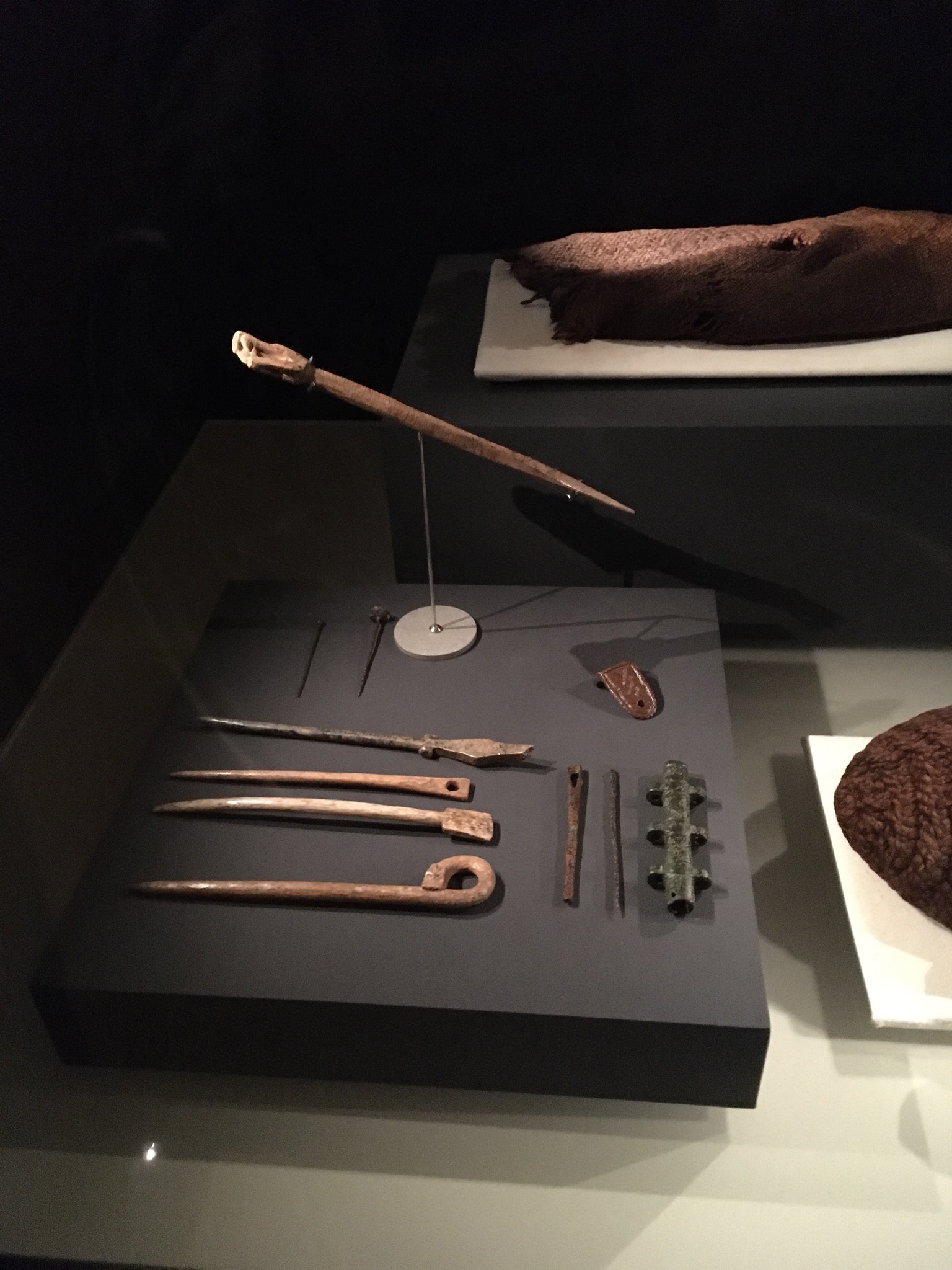 And here are relics of nålbinding, a precursor to knitting. I’ve looked at the modern books on nålbinding, and I completely understand why knitting supplanted it as soon as the knowledge of knitting spread. Knitting is FAR easier! 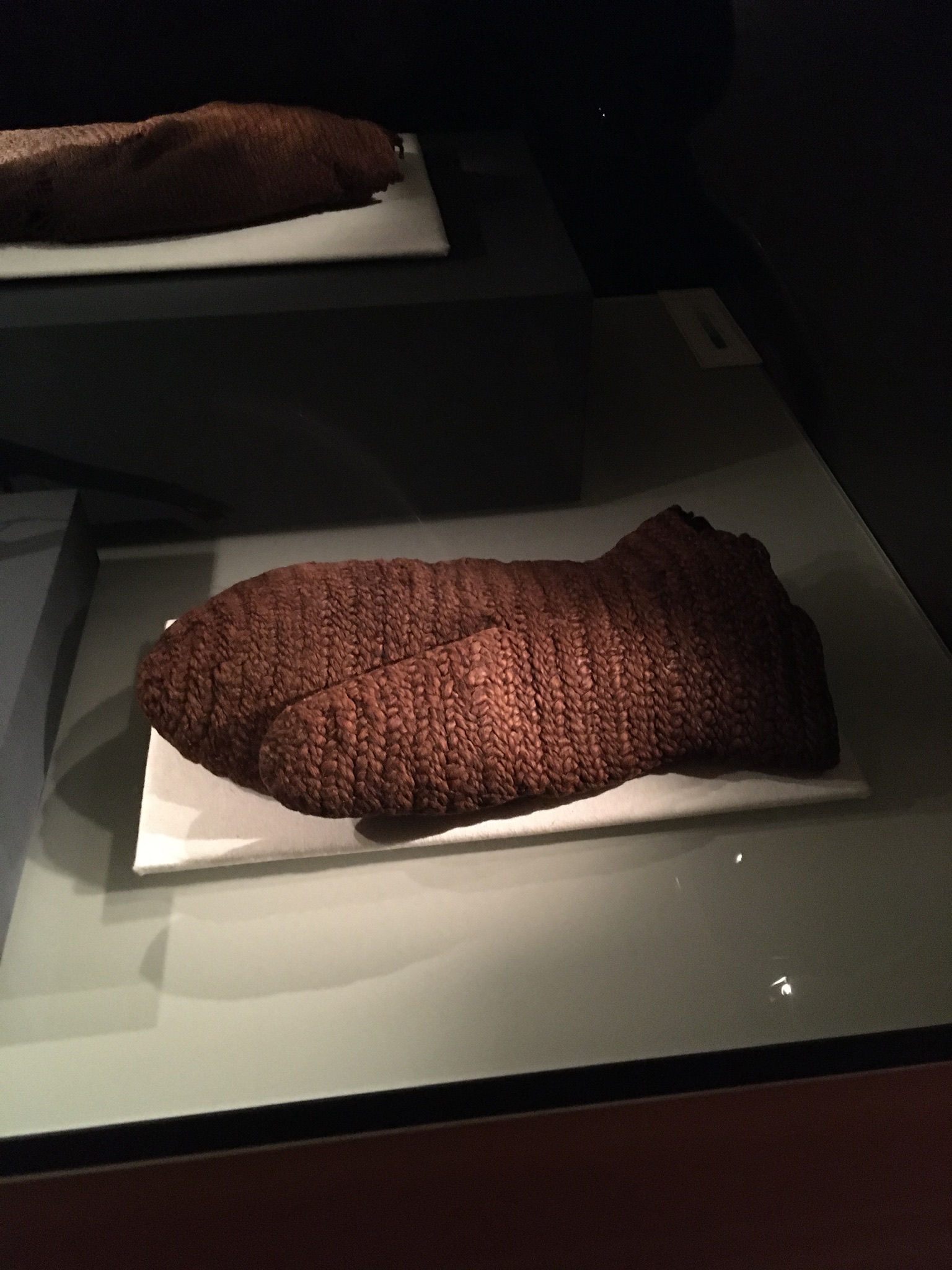 Mittens done in nalbinding in the National Museum. 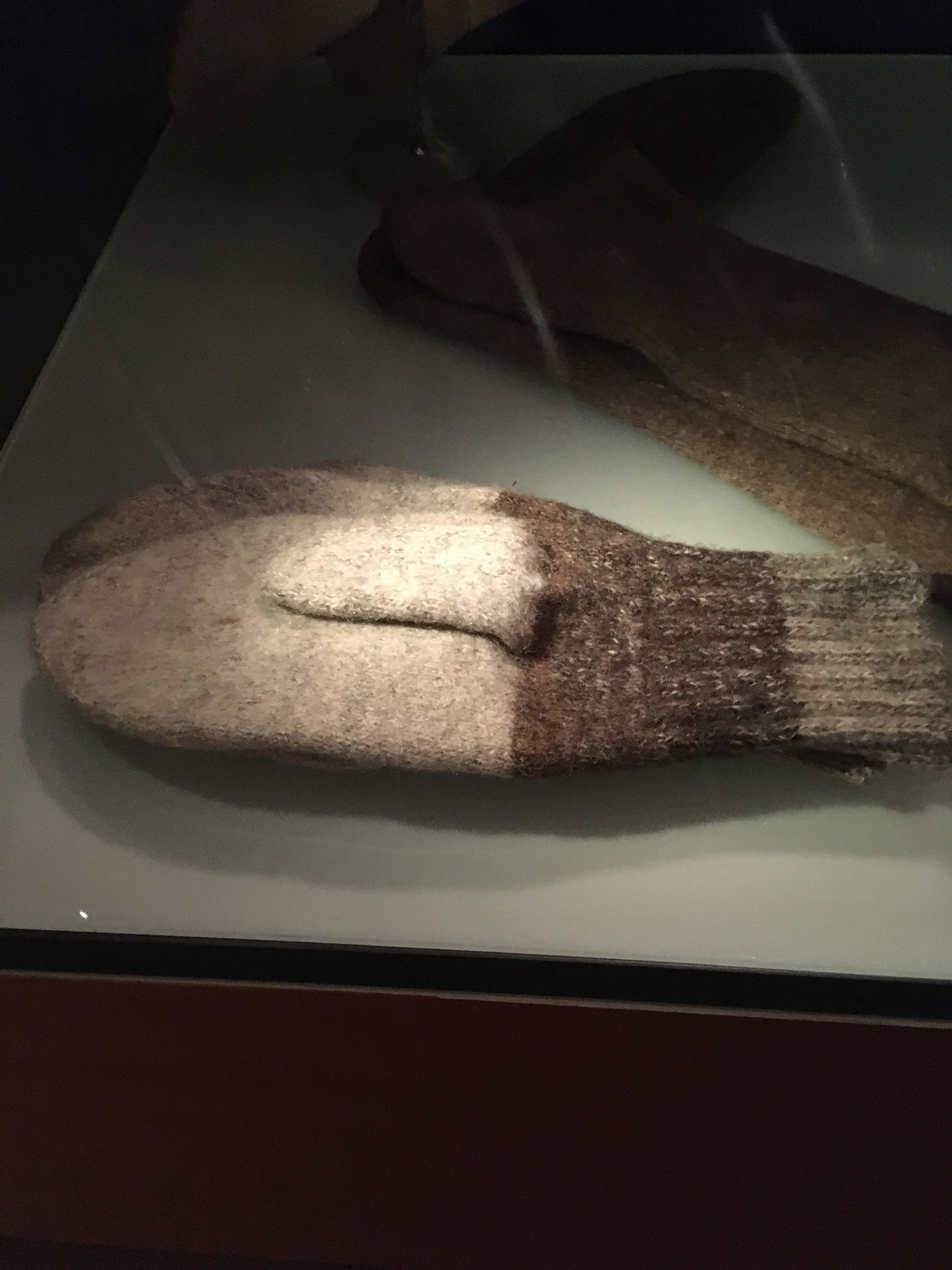 Mittens knitted and felted in the museum; they certainly looked warm! For quite a while, fish and wadmal (a woven and heavily felted fabric) were Iceland’s two biggest exports. 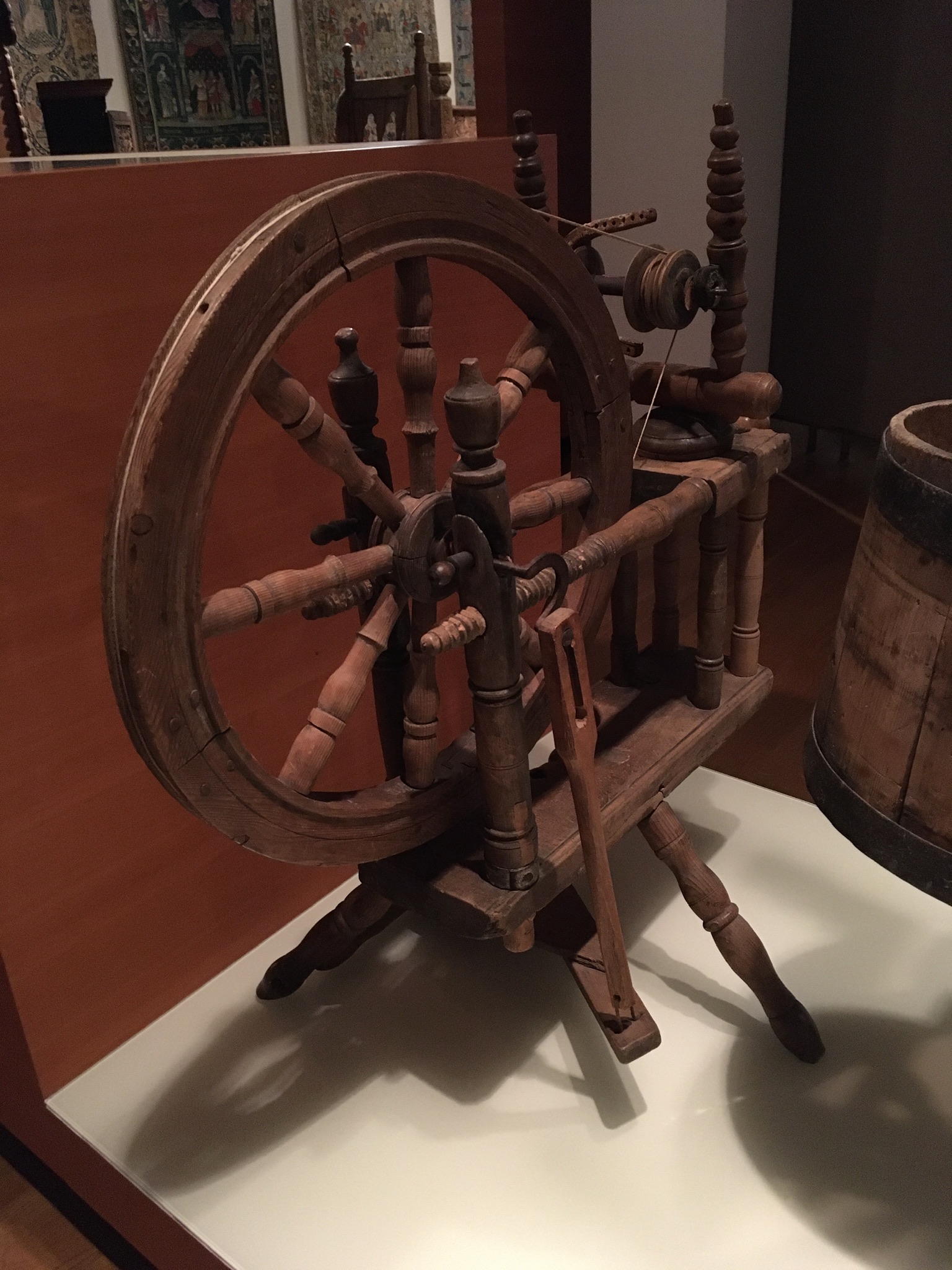 Given that Norway was Iceland’s biggest trading partner for a very long time, I was surprised that all the spinning wheels I saw, with the exception of this lone Norwegian-style wheel in the National Museum, looked like Shetland-style wheels. One wonders what could have caused that! 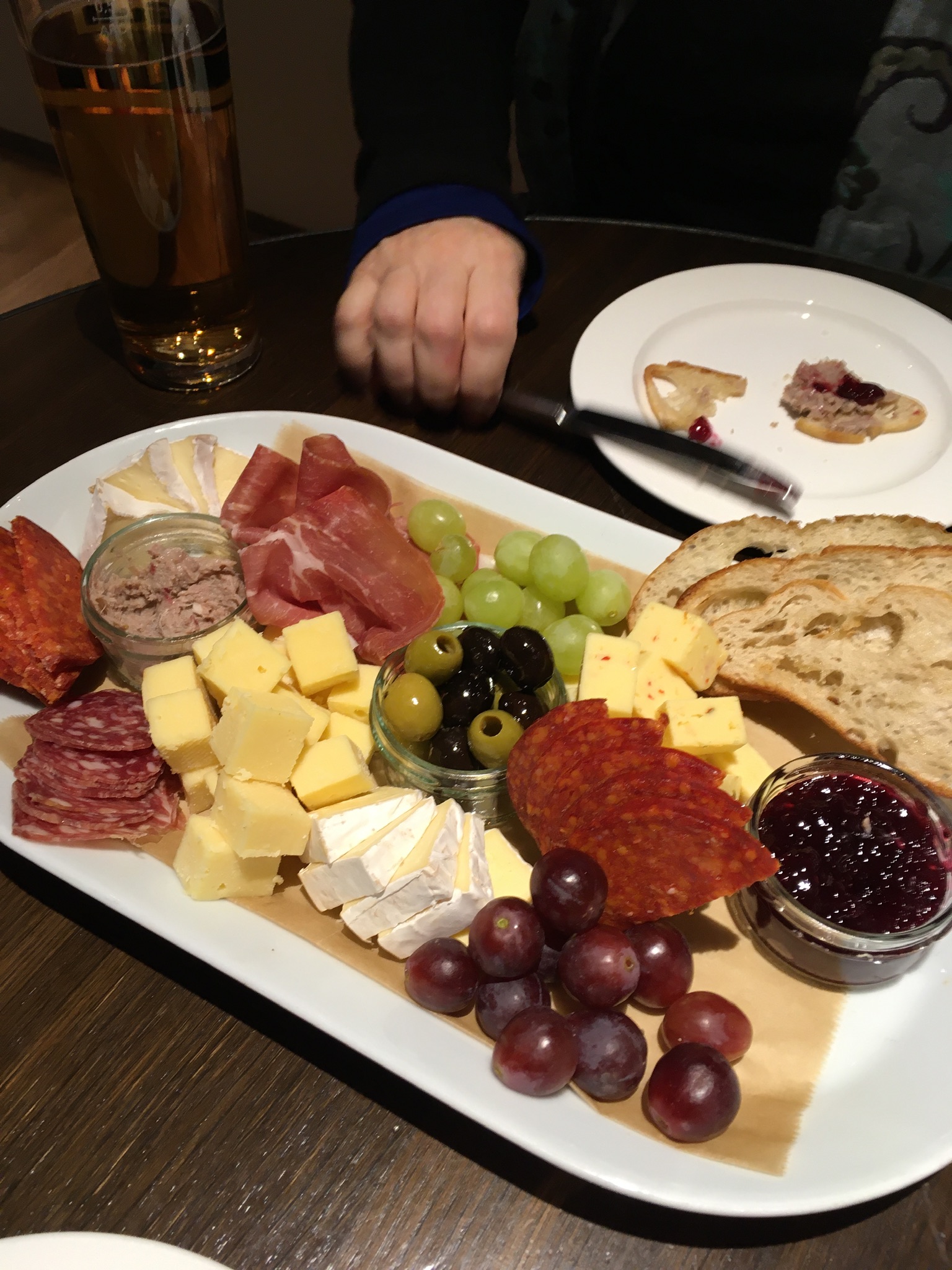 Our package at the hotel included both breakfast and a happy hour cheese plate and beers; most evenings we just had the cheese plate for our dinner. The restaurant chef was justifiably proud of his duck pate; we were well fed and happy! 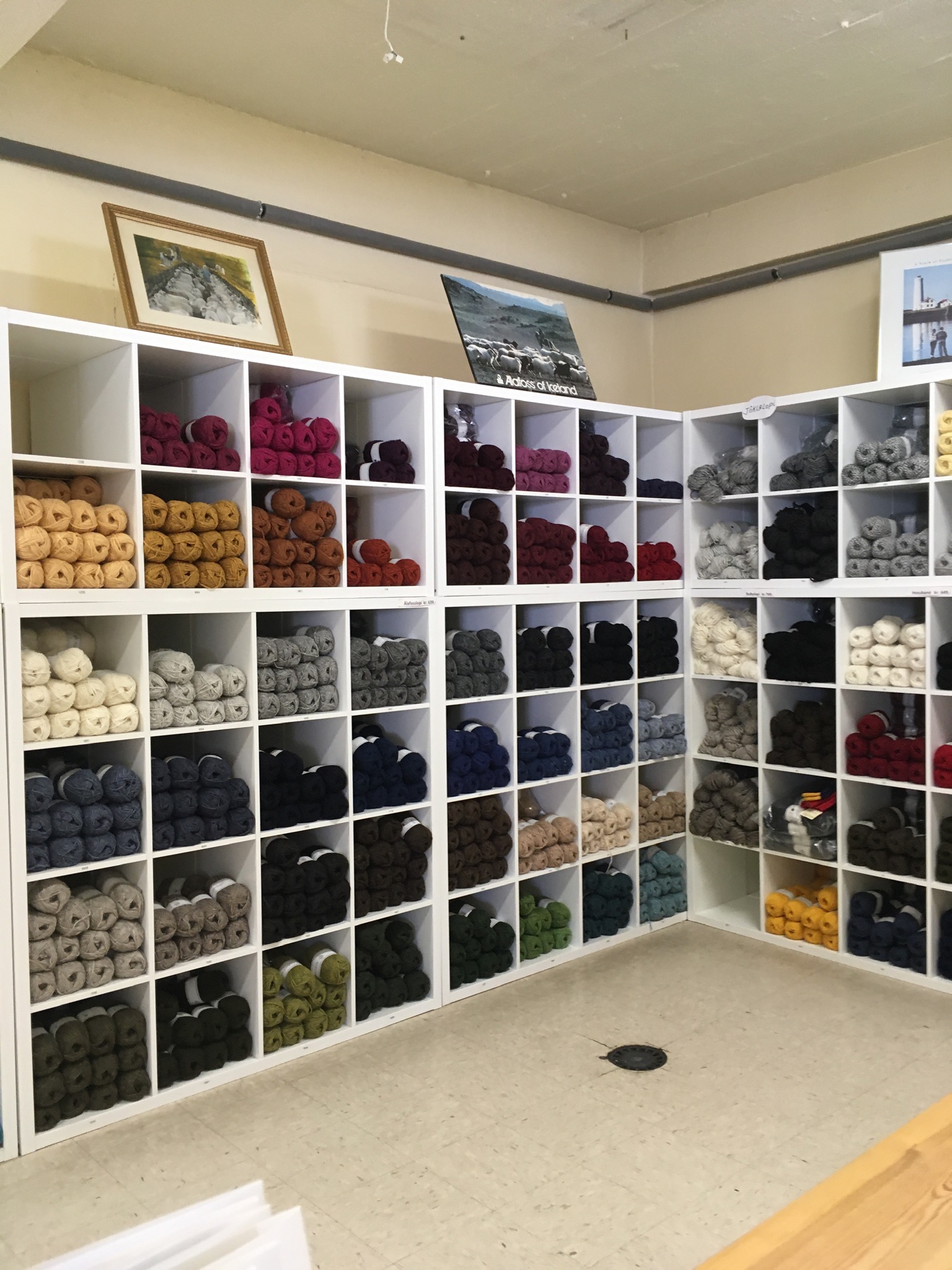 Ah, Nirvana! This is the Alafoss woolen mill store, about 15 miles north of Reykjavik in Mosfelsbaer. This is the home of Lopi yarn, the famous Icelandic wool that is used for the very distinctive patterned-yoke sweaters, knitted in the round. The mill and the rest of the processing facility is partly owned by a cooperative of the sheep farmers; over 90% of them belong, and benefit from the sale of the yarn. Some of this may have come home with me. 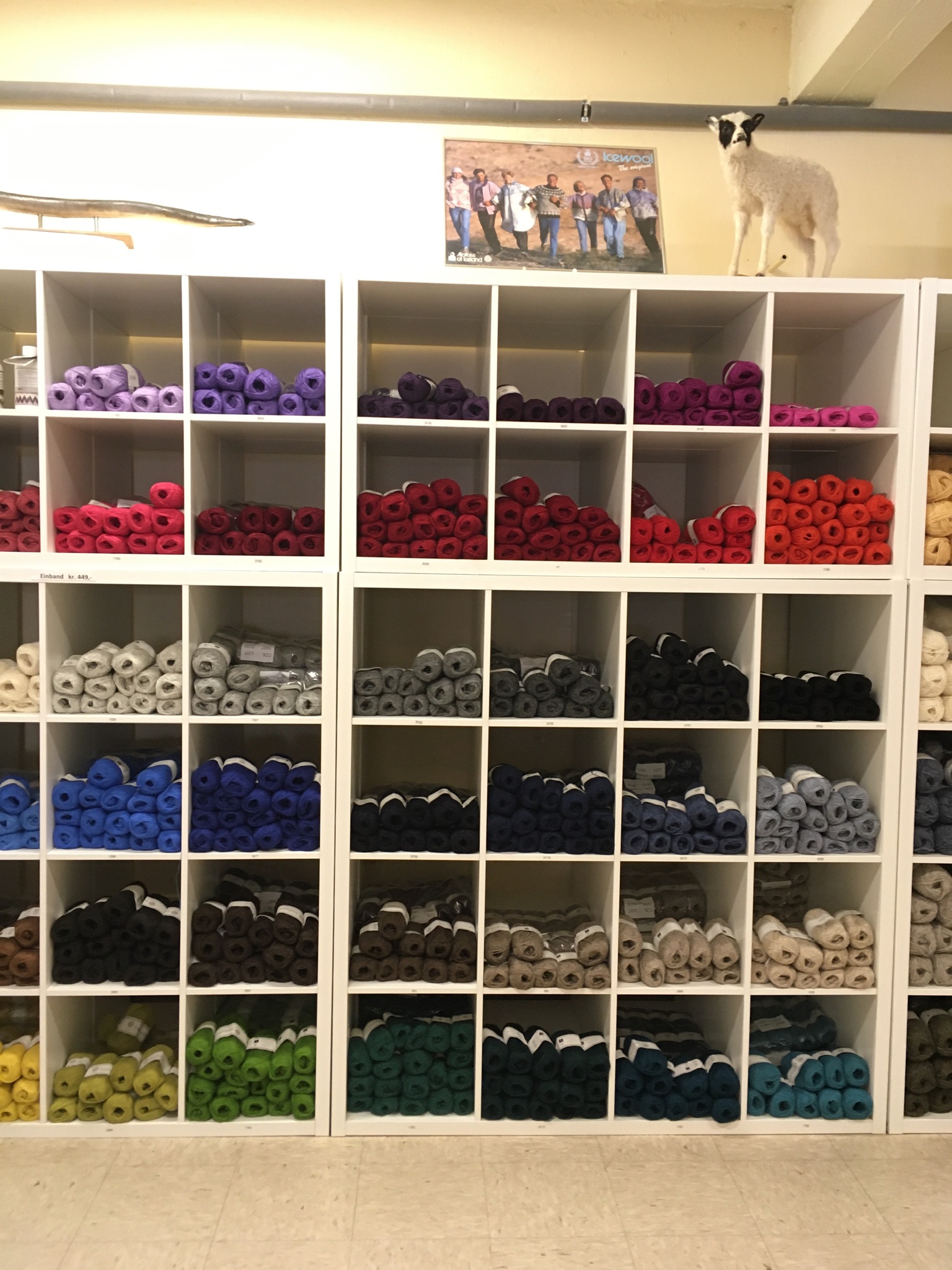 More of the lovely Lopi. The yarn is made if the Icelandic sheep’s long dual-coated fleece, with the tog and the thel (guard hair and down) carded together. The yarn is very low-twist singles, and the many bends of the knit stitch give it enough structure that the sweaters are at no risk of self-destruction. The Icelanders are very proud of their knitting traditions. 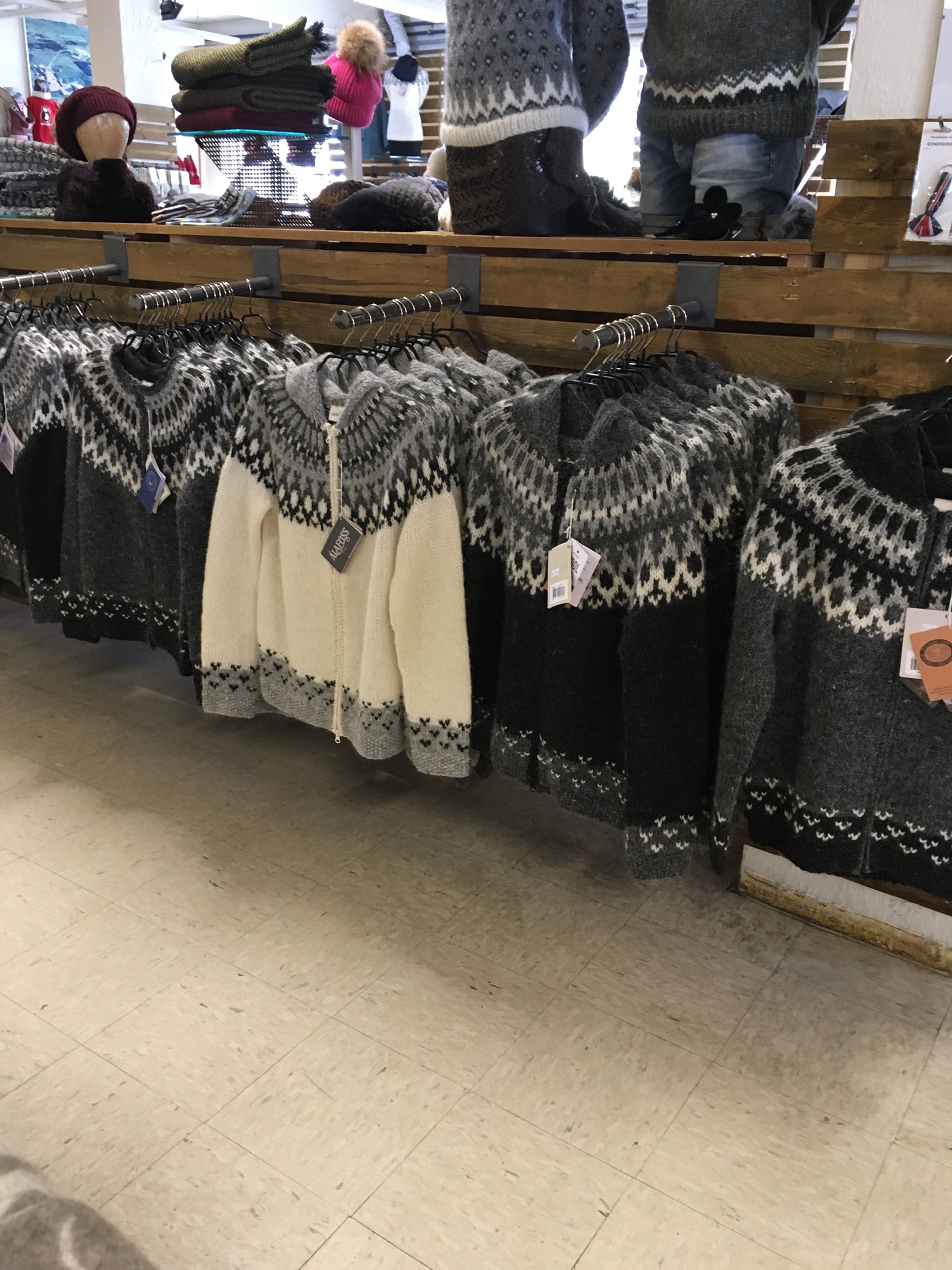 Lopi sweaters in the iconic geometric yoke pattern in the Alafoss store. Foss, by the way, is Icelandic for waterfall, so Alafoss is the waterfall on the Ala (or Eel) River; that is the fall that powered the mill. Most of the electric energy consumed now is very cheap geothermally-generated. 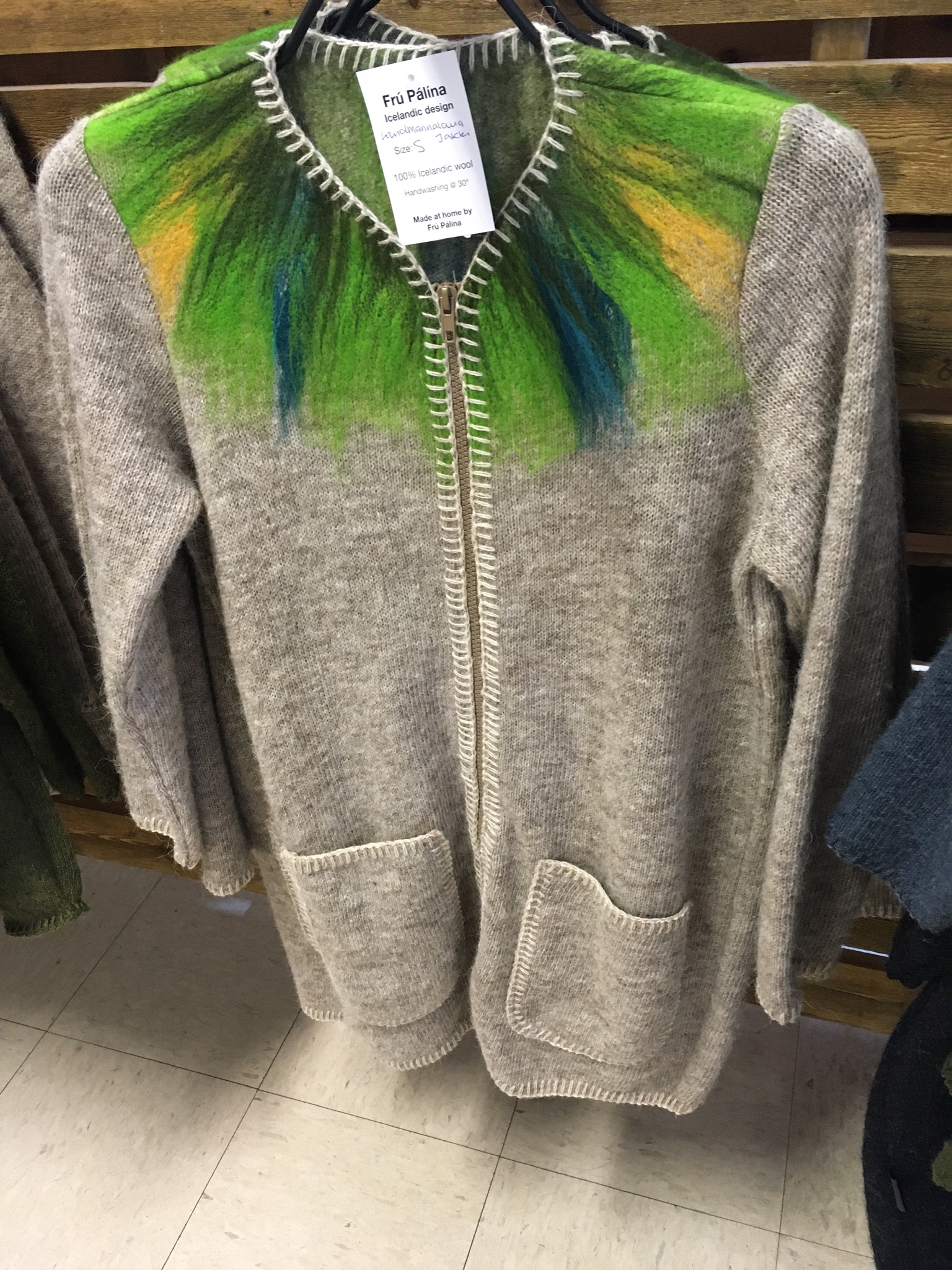 This is a modern take on the Icelandic yoke; the sweater is machine knitted, not in the round but as flat pieces and then sewn together, with the yoke’s design needle-felted on with un-spun wool. Very cool effect, and an idea that could be used when up-cycling an old sweater, perhaps. 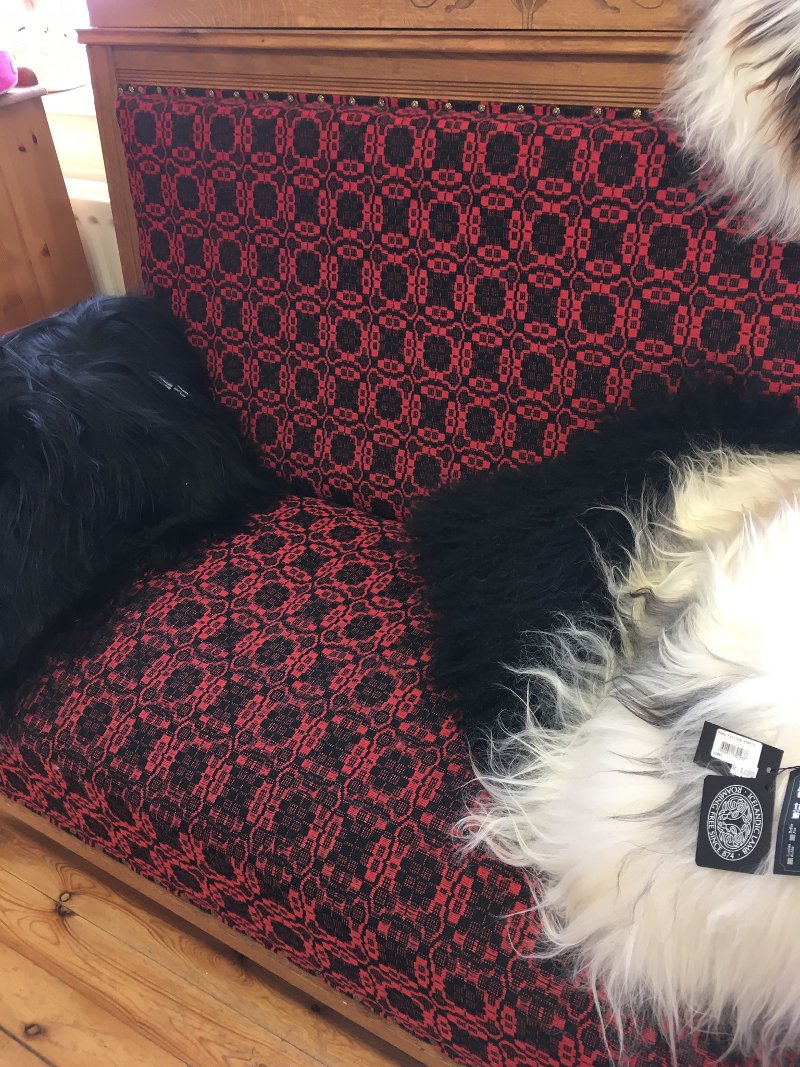 OVERSHOT!!!!! I couldn’t believe it, but there it was, likely handwoven, for the upholstery on a couch in the Alafoss store. It looks like Whig Rose with a little bit of a variation. I was thrilled; it is part of our shared textile tradition with the weavers of Scandinavia. 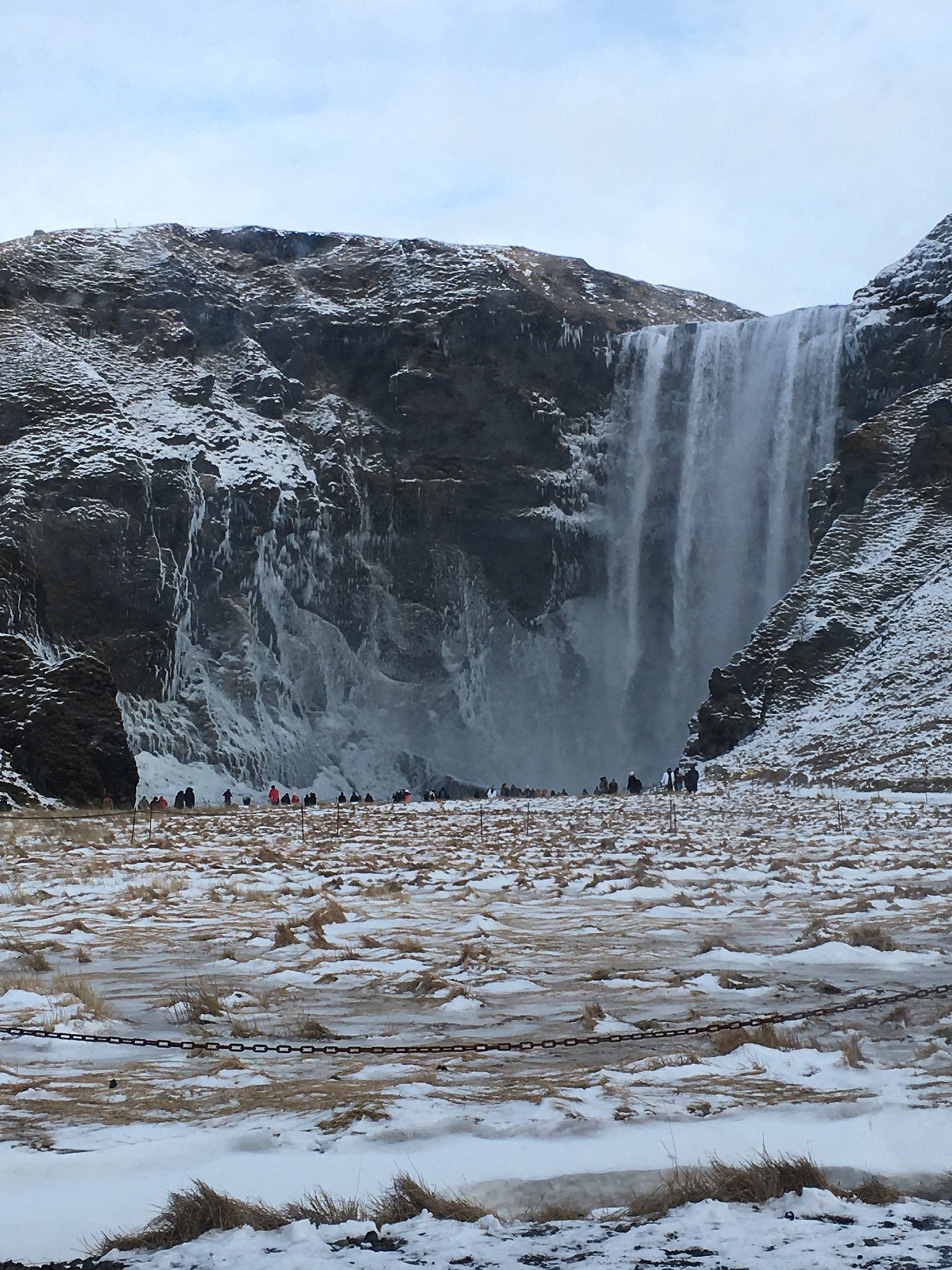 Skogafoss (foss = waterfall; Skoga, the name of the river), along the southern coastline of Iceland, about half-way from Vik to Selfoss. This has been used as a location for film shoots both for Game of Thrones and the series The Vikings. 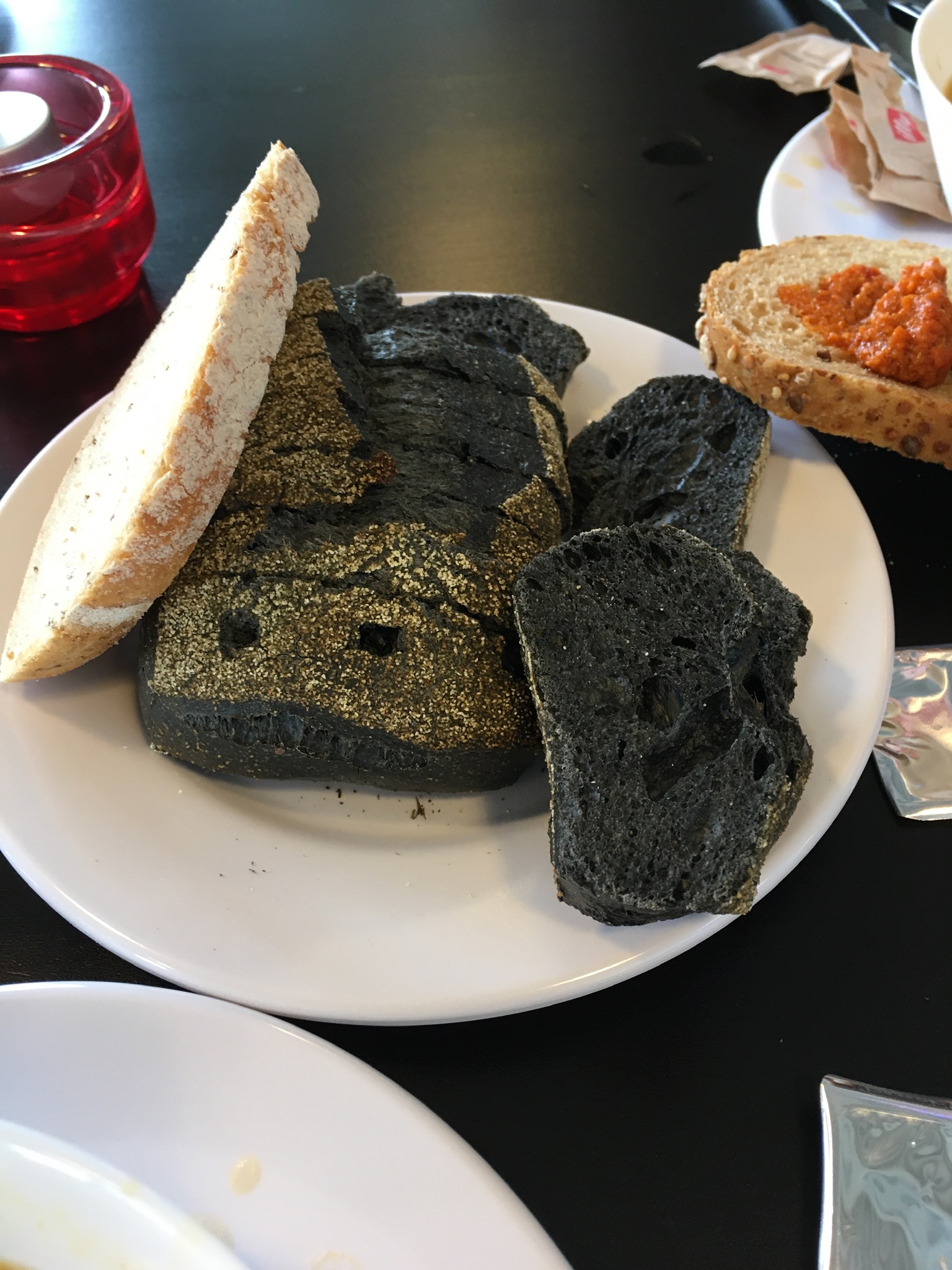 Really truly BLACK bread in a little bakery/cafe in Selfoss; they call it lava bread. We searched unsuccessfully for recipes, and finally concluded from a couple of obscure references that it was likely a little charcoal used for the color. We found another reference that suggested black cocoa as a colorant; that seemed more palatable. The soup was divine. 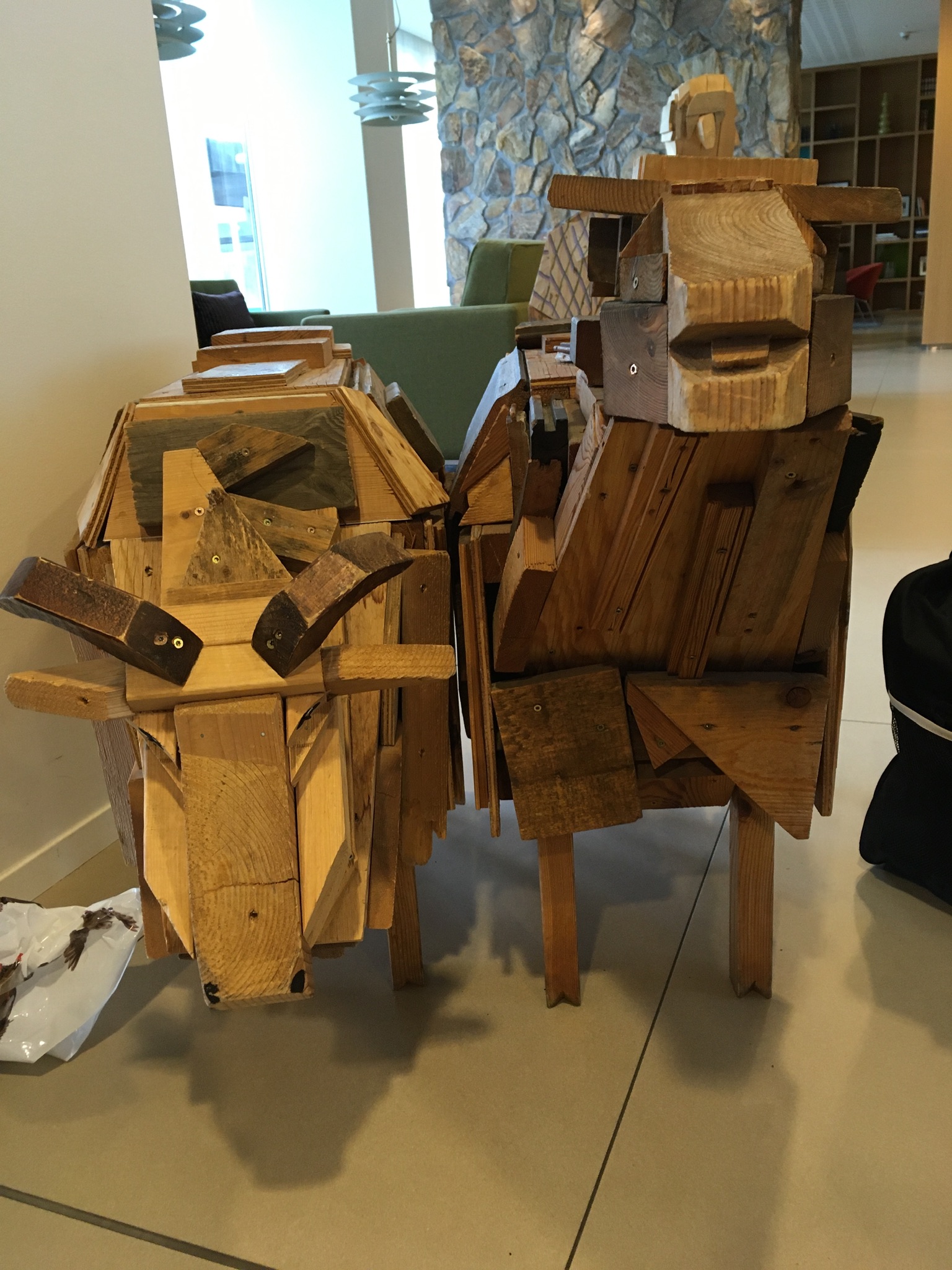 Sheep sculptures made of reclaimed scrap wood in our hotel lobby; I found them friendly and welcoming. 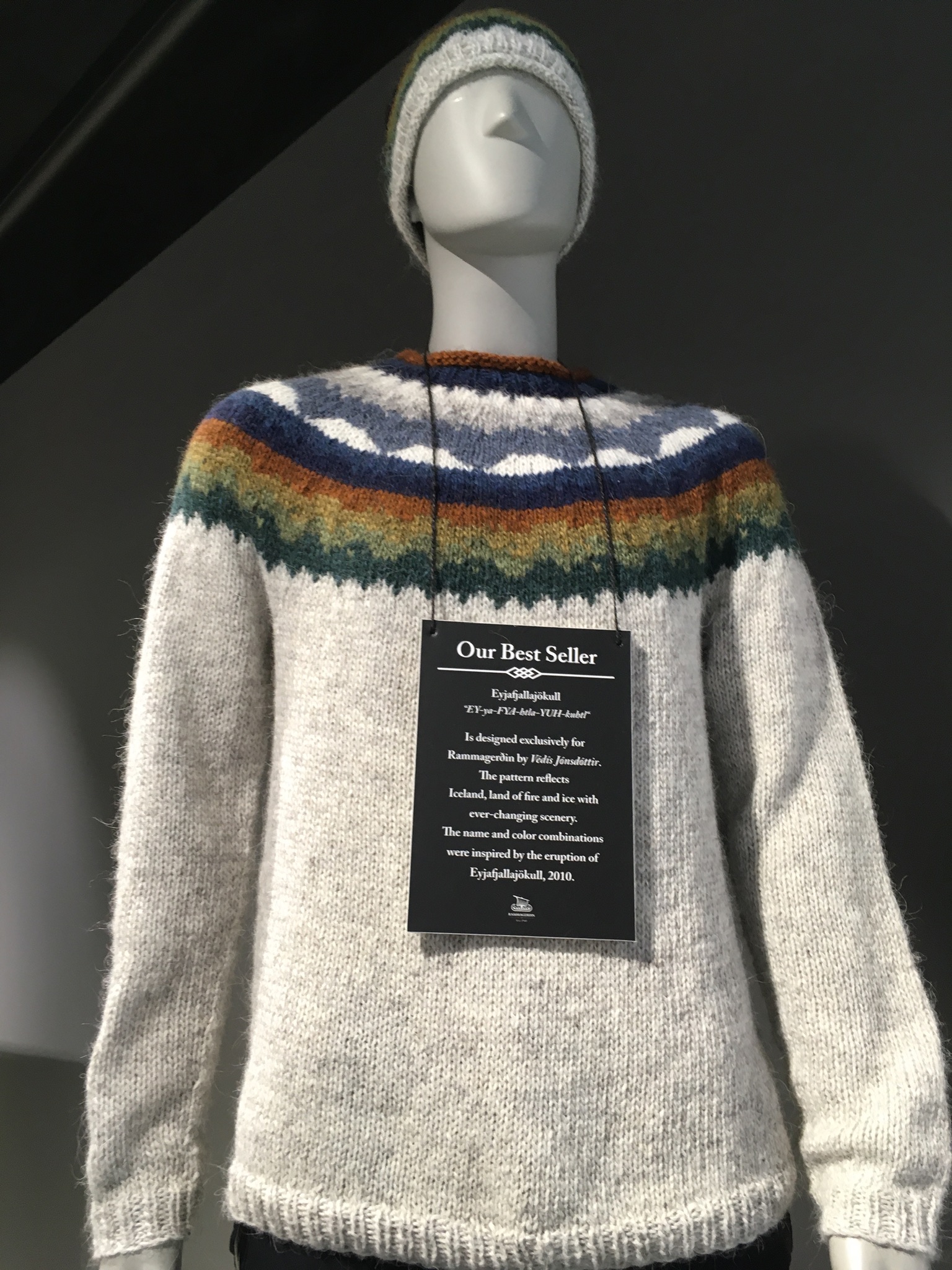 Another take on a yoke sweater, this time in a landscape rather than a geometric motif. From a shop at the Keflavik Airport. 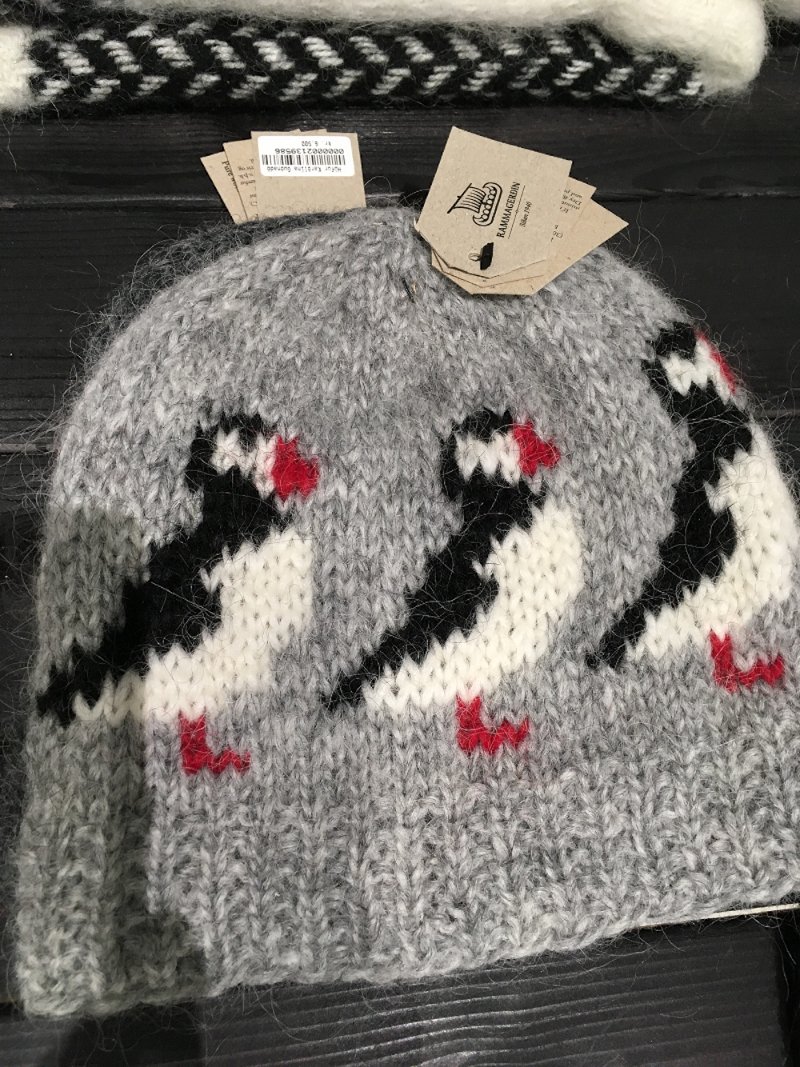 Puffins on a hat! Keflavik again. 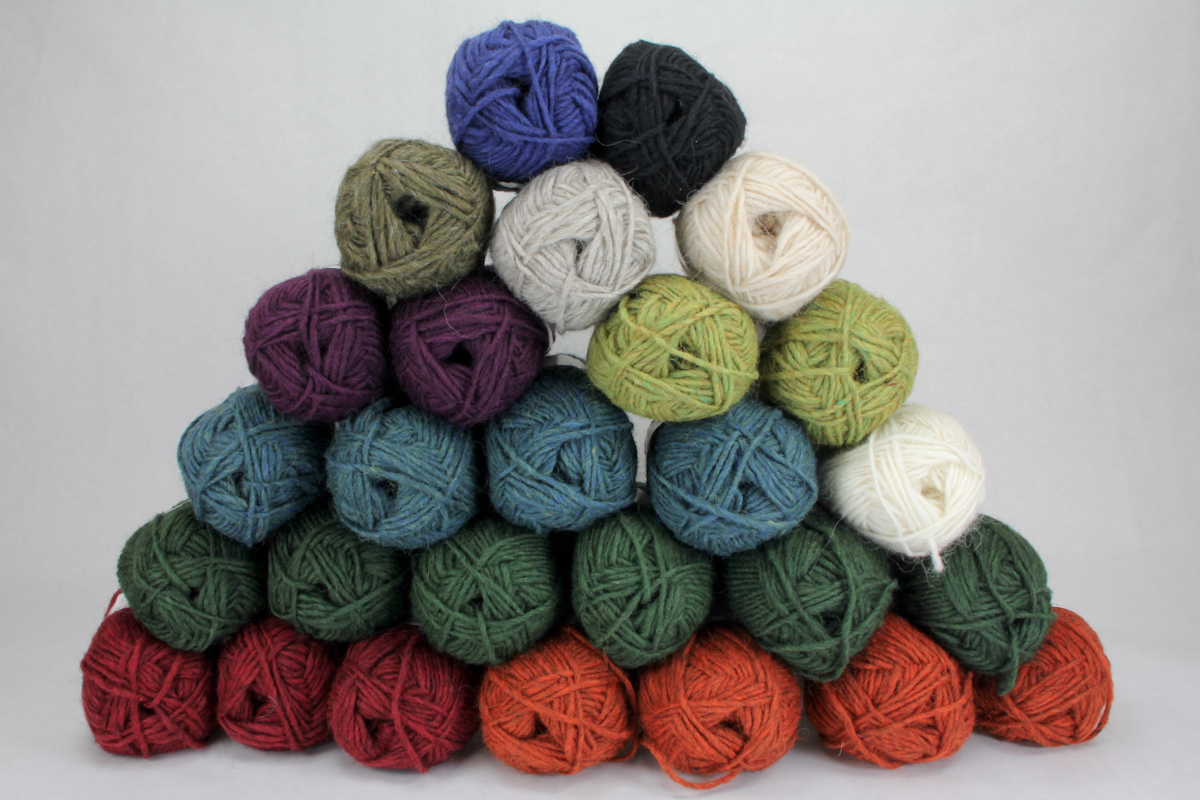 With luck, that’s three sweaters; two for me, and one for my traveling buddy Leslie, who felts, but doesn’t like to knit. Despite Iceland’s reputation for being expensive, yarn is very reasonable; those 100 gm skeins worked out to about $6 each. 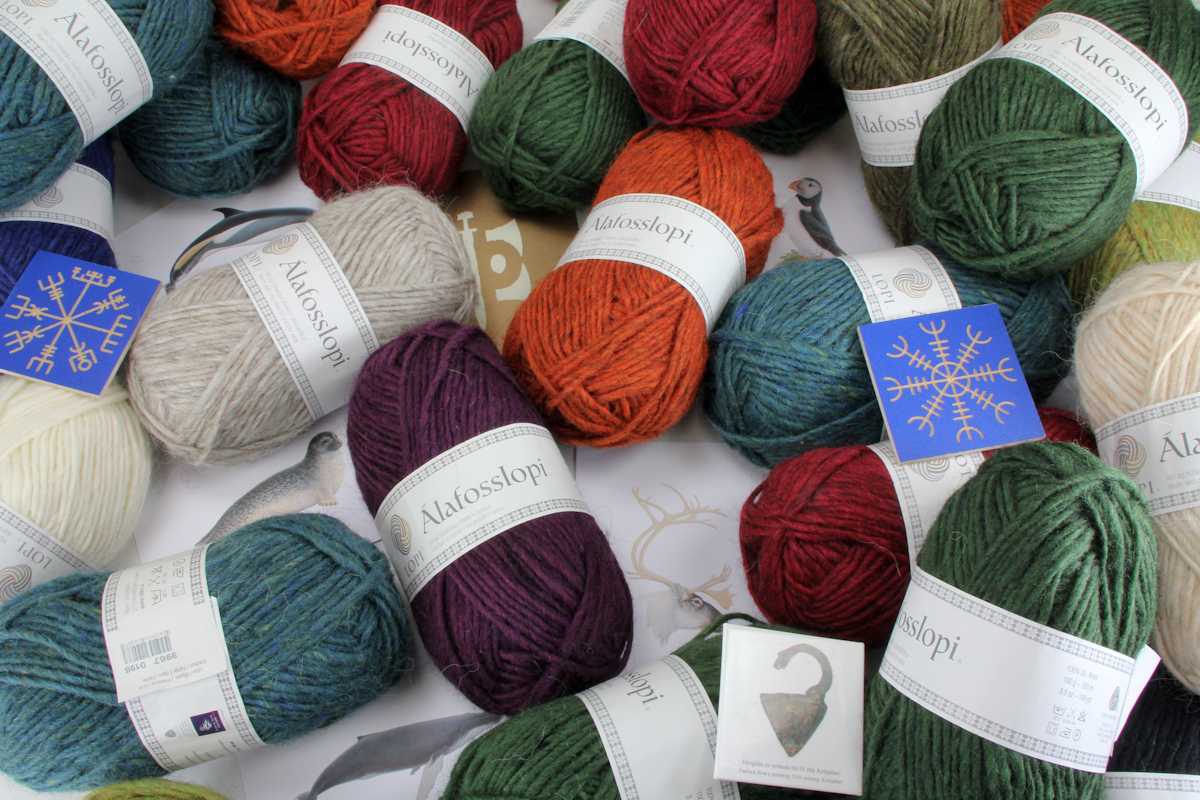 What booty! Refrigerator magnets in Icelandic hex signs; yarn; puffin, whale, caribou, and seal postcards; and memories of a great trip with my best road-trip buddy. This was a vacation that couldn’t have been beat.