The final post of our Special Edition of Ask Nancy is here!

Previous Posts in this Series: 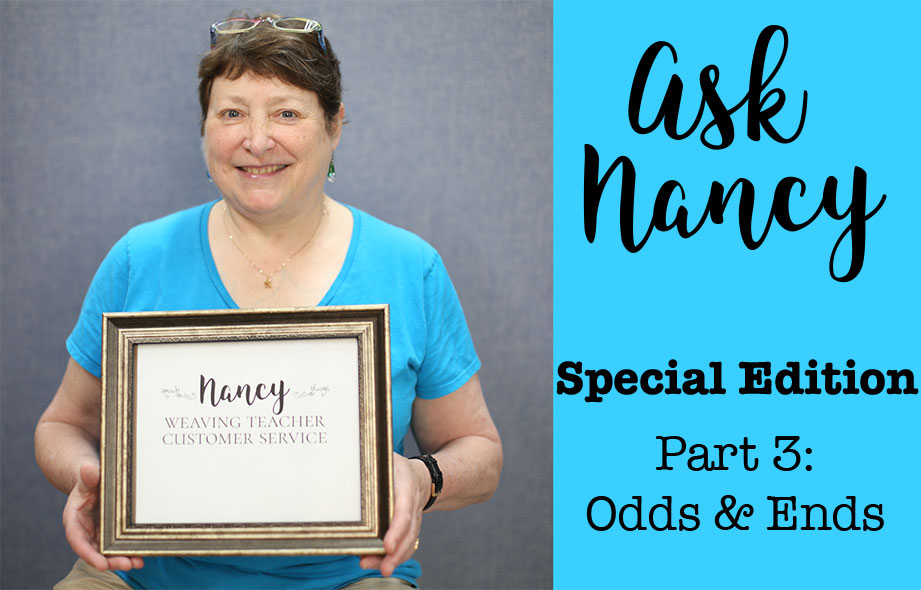 So to wrap up, we’ll collect all the small bits that didn’t fit neatly into tension and abrasion in this story of the destruction of soft warp yarns, and with luck, we will have put more successful weavers into the world to spread joy wherever they go!

In planning a project (in this instance the nice soft scarf we have been talking about), you have to choose nice soft yarns for the warp as well as the weft; the warp is half the project. If your warp is bulletproof, a soft weft will shift the average perceived softness somewhat, but the scarf will never be as nice as it could be if you don’t start with a soft warp. Look for example at any soft commercially woven scarf; look closely, drag out the pick glass and look REALLY closely; that is some fine yarn. Pull out that old Pendleton plaid shirt in the closet and look at that, too; odds are, the size of that yarn is 2/18 or 2/20 wool. If you have any of that yarn in your stash, pull it out and do a break-strength test on that. These fabrics I’m using as examples are all machine-woven; go look up a YouTube video of machine weaving in a mill, and tell me that you can’t weave more carefully and gently than that as a handweaver; it is well within your capabilities to do any of these things.

Let’s go back and talk about handspun yarn for a moment; we did a yarn exchange in our guild some years ago; 16 spinners signed up and spun a pound of yarn that they then wound into little one-ounce balls, and we did a grand swap-around and everyone had the same 16 ounces of varied yarns to work with… now go do something with that, and bring it back to the group. I warped my loom in stripes, one stripe for each of those ounces. I had a few misgivings, but I was committed to my concept, and kept on. Some of the spinners who had signed up were fairly new, and some of the spinners, while not new, were fairly indifferent in terms of skill level; some of that yarn was pretty funky. No one knew going in that their yarns would be used as warp, and so no one put in extra twist for strength. I warped up the loom, chose a skinny black commercial yarn out of the stash to unite it all as weft, and wove. And not a single warp end broke. Not ONE. I took it off the loom, wet-finished it, cut it in half and sewed it into a shrug, and it is in use to this day, soft and light and warm as toast. Handspun, and some funky handspun at that, as warp. And no breakage.

This brings up how you beat, as well, and the role of the reed in careful weaving and protection of warp yarns. While the verb is “to beat,” in fact the action is “to nudge,” especially weaving with soft yarns. If you want a soft scarf, don’t beat it like a rug. If you need a balanced plain weave, you need the same number of weft picks per inch as there are warp ends; USE RESTRAINT in beating.

While knitters knit with finished yarns (washed, fluffy, and bloomed), weavers work with UNfinished yarns; we want the yarn to stay nice and compact, and so more protected from abrasion in the reed. We want the fulling to take place in the piece when it comes off the loom, not before. For this reason, if you have a yearning for Superwash, sample first; the piece will not change as much in wet-finishing, and you may need to adjust some of your variables.

Do you want to use singles yarns? Singles are certainly more efficient to use; producing them takes just 1/3 of the time and energy as spinning a 2-ply yarn, and 1/4 of the effort of a 3-ply yarn. And guess what, it still works as warp. You will need to do something to tame the twist, or you’ll have a snarly mess that will make things impossible; but steam-setting under tension is the way the commercial yarn producers make non-kinky singles behave themselves; you can do that too; and we’ll go into that at another time. The thing to remember is, singles work fine as warp. I had a project go to the state fair one year and come home with a blue ribbon that was a handspun singles warp and weft; I didn’t break a thing in weaving it, either.

Never believe what other people tell you when they say something won’t work. Sample it, and learn the lesson yourself, and see WHY it won’t work, and analyze what it will take to make it work. Maybe those people are full of it; maybe they are just repeating folklore. Study, learn your craft, stretch, grow. I’ll write more; and if you have questions, ask.