Our favorite weaving teacher, Nancy, has been dropping some important knowledge on Facebook. We are sharing the info here too so that it will be more permanent and searchable.

Previous Posts in this Series: 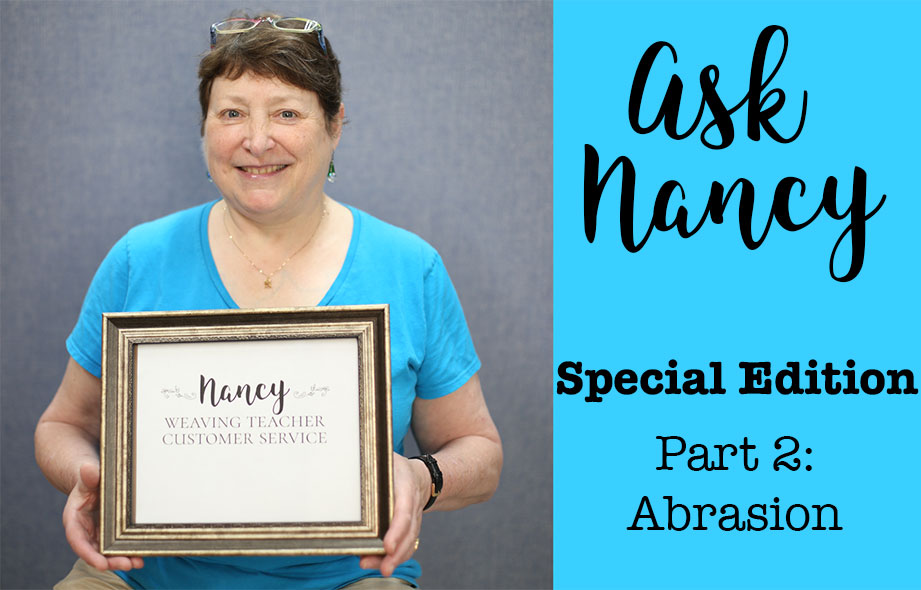 Last time we talked about tension, but just in what you could expect in a given yarn, and not overall as it pertains to a warp on the loom. So before we leave that topic… NO BANJOS.

I love banjo music, let me say that first; but cranking up the tension on your warp to the point where you can play a tune on it is unnecessary, wasteful, hard on the equipment and the warp, and ultimately just tragic. The amount of tension needed is just enough for error-free weaving, so that when you throw (or pass) the shuttle, there should be no slackers standing up from the bottom layer, nor drooping down from the top layer, to catch an unwary shuttle and cause you to weave a skip. Just that; you don’t need extreme tension, and on a soft warp, you can’t have it, or things will snap. You just need even tension.

And so on to abrasion. The first thing is abrasion in the reed, so you have to size the reed to the yarn. If you have for example a soft yarn at about 24 WPI (wraps per inch), a logical place to start in determining sett will be 12 EPI (ends per inch). That makes sense, so let’s start the first trial balloon at 12, which logic will tell us is very convenient for our 12-dent reed. First though, take a piece of that yarn and run it back & forth through a dent in that reed 30 or 40 times, to simulate the abrasion it will be enduring as you weave. If it abrades significantly, that’s a poor reed choice. It might be a great warp sett though, and just exactly what you want; so reach for the 6-dent reed instead, and sley the reed at 2 per dent. Magic; you have cut the abrasion in half, and have a much better chance of a successful outcome.

The next abrasion hot spot is the selvedges, and many weavers come to grief there because of excessive draw-in. There will always be some draw in, but if it’s not excessive, it will work. The next time you are at the loom in front of your project, pull the beater back toward the fell of the cloth slowly, and observe what is happening to the outer couple of warp ends. There is LOTS of abrasion there, and the selvedge threads are at a terrific angle and stretched, rather than nicely perpendicular as the rest of the warp is; that’s draw-in, and it happens because the distance from the right side of your warp to the left side is, in our hypothetical 10” scarf, 10 inches. However, the distance that the weft has to travel is considerably more than 10” because of the over and under wave nature of the path. To counter that, you have to leave sufficient weft in the shed to account for that increased distance. This is why we “bubble” our weft, or leave a steep angle before beating. Anything more than about 1/2” of draw-in on each side is excessive, and you need to change some habits, or you will always be plagued by broken selvedges.

And this brings us to the last of the abrasion plague spots, and that is the habit of not stopping to advance the warp frequently. If you have woven 3 or 4 inches without advancing, bring the beater toward the fell slowly and observe those same selvedge threads; yikes, that is an awful angle, and a lot of stretch and abrasion going on out there. The closer the fell approaches to the beater, the riskier it is on the poor selvedges; stop and advance your warp every couple of inches, and you will be a better weaver.

Next up, we will have part 3 of our little series, where we clean up miscellaneous odds and ends of putting to rest some of the fallacies wandering around out there that concern warp yarns, and what will, or won’t work; what breaks warp yarns and what preserves them.